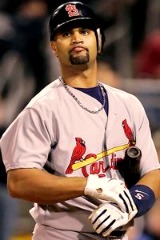 A little over a month ago I wondered aloud if the Mets would consider signing Albert Pujols — if indeed he became a free agent at the end of the 2011 season.

Back then, the idea that Pujols would become a free agent seemed ridiculous — surely, the Cardinals would find a way to lock him up before Opening Day.

Now, it’s becoming more and more realistic to believe that Sir Albert will indeed play out the final year on his contract and hit the market next winter.

Unfortunately, it’s also become apparent that the Wilpons could be broke by then — and may not even own the team when winter arrives.

Assuming nothing changes in ownership between now and then, it’s a foregone conclusion that the Mets will be in no position to get in on the bidding should Pujols be a free agent. However, what if a new owner buys into the team before then — be it as a minority stakeholder injecting the franchise with a significant cash contribution, or a big-time investor who purchases the team outright? Would new ownership seek to make a big splash by signing Pujols, perhaps as a way to send a message to their fans and MLB that “the Mets are back and mean business” ?