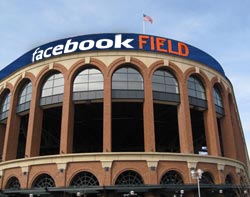 1. Mark Zuckerberg
So many reasons this makes sense, not the least of which is Zuckerberg’s local roots. Also, the Mets’ official blue color is pretty close to Facebook’s blue, and Zuckerberg can leverage FB’s many billions to pay off the team’s debt and buy out CitiGroup, thereby renaming the home park “Facebook Field”. Additionally, each Met player would be required to create a Facebook page and interact daily with fans. How much fun would it be to join David Wright’s family in “Mafia Wars”, and beat Mike Pelfrey at Farmville?

2. Larry Page and Sergey Brin
The geniuses of search can use their new search algorithm to find the best baseball talent in the world. Also, it will be really cool to see goats grazing in the outfield of Citi Google Field.

3. Mikhail Prokhorov
The main reason Prokhorov would buy the Mets is because he can. The second reason would be to tick off Jim Dolan. Also, Prokhorov would like to have two teams with rhyming names. There is of course, the fear that the team would be moved to Brooklyn; though, I’d rather the team be known as the Brooklyn Mets rather than the Flushing Dodgers. Added bonus: the Mets annual Christmas party would potentially be much more interesting.

4. Steve Jobs
The CEO of Apple is a natural fit in the Big Apple and of course the stadium already houses the Home Run Apple — such a purchase would certainly please Matt Cerrone. Promotional nights would be much cooler too; instead of cheesy tote bags, sun visors, and paper-thin T-shirts, people would get blue and orange iPods and nanos.

5. Bobby Bonilla
Bonilla can buy the one-quarter share offered by the Wilpons right now by simply absolving them of responsibility of the deferred millions he’s still owed through the 25th century. His first order of business will be the installation of casino-class poker tables in the Mets clubhouse, and lifting Terry Collins’ ban on card playing prior to games.

6. Oprah Winfrey
Oprah will buy the Mets but let the Wilpons keep SNY — which on the surface would seem like a good deal for the current owners until she starts showing Mets games on OWN. Oprah also will give away Oliver Perez and Luis Castillo, among others, on the premiere episode of “My Least Favorite Things”. 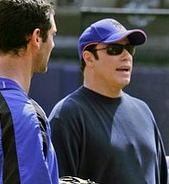 Travolta grew up a Mets fan in Englewood, NJ, and now has the financial wherewithal and connections to purchase his favorite team. It’s more than just a love for baseball, though — owning the Mets is an opportunity to recruit MLBers into The Church of Scientology and promote the teachings of L. Ron Hubbard.

8. Sir Richard Branson
The British entrepeneur adds the Mets to his Virgin portfolio, and completely overhauls the stadium in Flushing. More than half of the seats are removed and replaced with wide, lush, leather barca loungers that are wired with MP3 jukeboxes, mini screens displaying the game and also providing internet access, and a handheld device for ordering food, beverages, and other concessions.

9. Sean Combs
Combs, tired of re-branding himself every three years, takes on the challenge of re-creating the public image of the Mets. The team is re-named the Flushing Dirty Piddy Diddies.

10. Jack Donaghy
The Vice President of East Coast Television and Microwave Oven Programming for Kabletown is a guy who knows how to get things done and make products profitable. I can’t think of a better man to lead the franchise out of their current doldrums, and he has the financial backing of a powerful but silent group of investors.

11. MLB
All things considered, this may be the most realistic future owner of the Mets … though, some surmise they already DO own the Mets.

Did I miss anyone? Post your suggestions in the comments.

Back Mets Beat Up Bosox Farm Team
Next What’s the Point of Hairston and Harris?