Where They Are Now: Endy Chavez 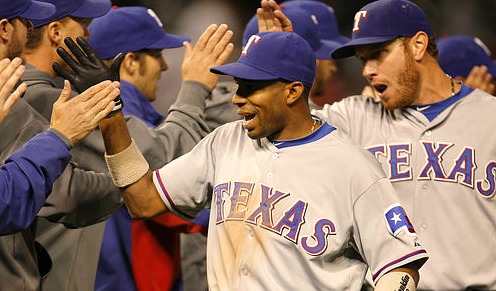 Of course you remember “The Catch” … meaning, the one by Endy Chavez rather than the one by Ron Swoboda.

Guess what? Endy is back on the field, and eliciting cheers once again.

Endy was a fan favorite at old Shea Stadium (remember that glorious venue?) for his all-out hustle, speedy baserunning, and often electrifying defense. He wasn’t the greatest hitter in the world, but he poked enough big hits to create the reputation as a “clutch” hitter in the minds of many.

Endy left the orange and blue when he was part of the 37-player package sent to Seattle in return for Jeremy Reed and Sean Green (there was another player the Mets acquired, but his name escapes me; from what I remember he didn’t play very much so it probably doesn’t matter). This was to be Endy’s big break: he had a genuine shot to see regular, starting duty for the Mariners. And he made the most of it, getting off to a red-hot start in early 2009. Unfortunately, he suffered a major, season-ending knee injury in late June of that year. At age 31, for a player whose game relied almost exclusively on his legs, this appeared to be career-threatening.

However, you can’t keep a good man down, and Endy began his road back to the bigs, signing a minor-league deal with the Rangers last February (interestingly, the Mets considered bringing Endy back at that time, but settled instead on Jason Pridie). It took him almost two full years to return to the bigs, but he’s done it — on May 15 of this year, he took his first turn at-bat since 2009. His start was inauspicious, going 0-for-9. But since then, he’s been red-hot — and hitting with power.

Last night, Endy had a 4-for-4 night — including 2 runs scored, a stolen base, and an RBI triple — to spark the Rangers to a 7-4 victory over the first-place Indians.

Since his first two games, though, he’s hitting .531. After his first four-hit game since July 25, 2008, he’s at .415 overall and has shown that he can hit, run and play quality defense just as he did before he was hurt.

“I’m trying to be myself and trying to focus on the game,” said Chavez, who is 17 for 41 since the Rangers purchased his contract from Triple A Round Rock on May 14.

“I had doubts, but I just continued to work hard and do my rehabilitation the right way and find out. I just appreciate all the support and opportunities the Rangers gave me. Now, I know I can continue to play baseball.”

No one knows how long his hot streak will last, but it’s great to see Endy back in the bigs and exciting fans again. Here’s to you, Endy, and best of luck!

Back Mets Game 56: Win Over Pirates
Next Manny Acosta Back with Mets