Daniel Murphy Out for the Year 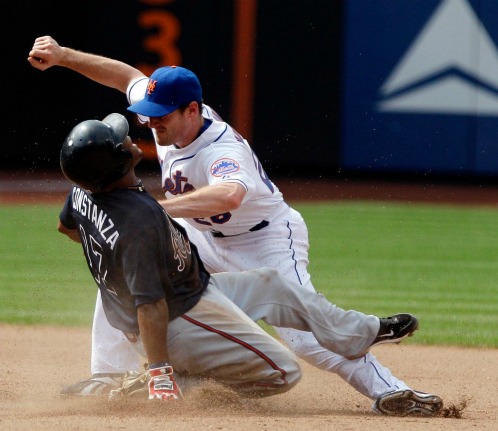 If you missed Sunday’s game, you may not be aware that both Jose Reyes and Dan Murphy left with injuries. Reyes exited with a tight hamstring that has been diagnosed as a “day to day” issue. Murphy, however, is out for the remainder of the season with a grade 2 tear of the medial collateral ligament in his left knee.

This is the second time in 14 months that Murphy was seriously injured on a play at second base. If you were in the camp that wanted to see Murphy play the position, are you still of the opinion that he can / should be a second baseman?

Last June, the Mets threw Daniel into the dangerous position of playing second base at AAA Buffalo with very little experience. I say “dangerous” because it is, if one doesn’t know what he’s doing around the bag — there are runners looking to take you out on a double play attempt, for example. And I say “dangerous” because it WAS — Murphy was taken out in his second game by career minor leaguer Leonard Davis, who was trying to break up a double play.

Many people blamed Davis, calling his slide “dirty”. It wasn’t. And it wasn’t Davis’ fault. To an extent, it was Murphy’s fault for not getting out of the way. In truth, the fault was on the Mets for putting him in that position.

Fast-forward to yesterday, and once again Murphy is injured on a play at second base by a sliding runner. This time, there was no argument over whether it was “dirty” (though, at least one journalist shockingly posed the question to Willie Harris; talk about trying to stir up a story that isn’t there). There is an unfortunate similarity between the two collisions — beyond the fact they both resulted in season-ending injuries. Like last year, Murphy was out of position, and unable to get out of the way of the runner. The difference in yesterday’s injury is that Murphy was somewhat experienced at second base. Which poses the question: should Murphy stay away from playing second base?

As you may know, I’m a catcher. I teach catching and pitching — those are my realms of knowledge. I’m not a second baseman, but looking at the replay a dozen times, it looked to me like Murphy was awkwardly straddling the bag, and that his leg was in a vulnerable position. So I asked a half-dozen people who played the middle infield at either the college or pro level, and all confirmed my suspicion: Murphy’s leg shouldn’t have been there; it was fundamentally poor footwork.

Once again, I’m not necessarily blaming Daniel Murphy for being in the wrong place at the wrong time. I believe at least some of the blame — again — must go to the Mets for putting Murphy into the situation. A common denominator between last year’s injury and this year’s is Terry Collins, who was the Mets Field Coordinator in 2010. In that role he had the opportunity to see a lot of the Mets minor leaguers, including Murphy. Collins is also a former middle infielder — he played 2B and shortstop in the Dodgers’ organization in the 1970s. I have to wonder if Collins felt truly comfortable with Murphy at 2B, and if he didn’t, did he have any influence on the decision to move forward with the experiment?

But it doesn’t really matter now who is to blame — Murphy’s out for the season, again. Sadly, he was in the middle of an excellent offensive season — one where he was proving he could truly hit MLB pitching. There’s no doubt he’ll come back in 2012 — the kid is too determined not to. When he does, should he include second base in his repertoire of positions? Or should he stay away from the middle infield, and hide his glove in the corners? Post your opinion in the comments.