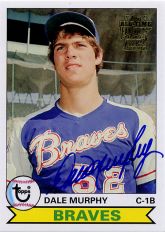 As a kid, one of my favorite players growing up was Dale Murphy.

I know, I know, he was a Brave (and no I’m not a Mormon), but back then the Braves weren’t to a Mets fan what they are now. If anything, they were a team that the cellar-dwelling Mets of the late 1970s – early 1980s had a chance to beat — and there weren’t too many of those teams around.

“I’d have called sooner, guys, but I had to get my car pulled out of the ditch I just drove into. This is a great teaching moment for a parent. You can explain to your kids why you’re not watching [Bonds] and why it doesn’t interest you.
“Even in a court of law, which this isn’t, in my opinion, you can have a preponderance of circumstantial evidence to convict somebody. Now, maybe I’m wrong, but when you get enough stuff on a guy, you can make a decision. It’s really a no-brainer.
“[Bonds] would have become one of the great ones, anyway. Now, he sucked the fun and the life right out of it. There is enough evidence to me to say without a doubt that he used performance-enhancing drugs. He hit 73 home runs when he was 37. Hank would have hit 855 if he had the same advantage.
“Barry’s a great player, but he put an asterisk by his name on his own. He’s deserved all the negative publicity that he’s getting. People have been complaining that he’s being treated unfairly. Life isn’t usually like that. You don’t just get treated unfairly. You usually get what you deserve.
“This is what Barry deserves. He’s a hard guy to like. He’s a hard teammate to have. He’s set a terrible example for our kids.
“That’s what you say to your kids. You say, ‘This is what happens when you take steroids. Your dad doesn’t want to watch this, because it’s drug abuse.’
“It’s frustrating. . . . Giants fans love it, and they are blinded by it. Most people put an asterisk by it. They have a problem with how [Bonds] has gone about his career. That’s what I tell my kids.
“There are a lot of [major leaguers] who are not being totally honest with how they feel about what Barry’s done . . . You take an anonymous poll of what players think and you’d have more Curt Schillings. The guy’s a great talent, but when you take exceptional talent and increase it with drug abuse, that’s what you get.
“It’s never been legal to abuse a controlled substance . . . A lot of guys decided not to do it, even though they weren’t testing. I decided not to do it. I thought it was wrong. It was illegal. I said, ‘I’m not going to do that.’ [Bonds] has a trainer sitting in prison because he won’t testify against Bonds.
“He hasn’t denied it. He said he took it, but didn’t know what it was. We found out later it was steroids.
“You just have to teach your kids to make judgments in life. You’re not always going to have all the facts, but you’ve got to make judgments. I understand in this country you’re innocent until proven guilty, but this isn’t a law case, this is how you feel.
“People don’t think [Bonds] did it the right way. I know he [used performance-enhancers]. I don’t have a problem saying I know he did. It’s obvious.
“I’ve got to take a deep breath here.
“I’ve said it all before, but for some reason we love our sports so much that we sometimes are so forgiving . . . But this is a great example of how not to handle your career, and how not to treat people.
“We’ve got to change the culture in sports.
“I just had to get that off my chest.”

Yeah, we’re wasting a lot of space on Barroid today, but I’m trying to forget what happened last night against the Braves.

Back Mets Acquire Outfielder
Next Mets Game 113: Win Over Braves