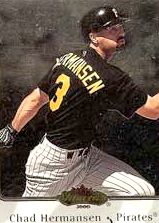 The New York Mets have traded for a righthanded hitting outfielder to bolster their depth.

And in fact, Hermansen was not technically acquired by the Mets, but by their AAA farm team, the New Orleans Zephyrs. So should we care?

Hermansen was acquired from the Marlins organization for “future considerations”. He was necessary because Ben Johnson is out for likely the remainder of the year with a severe ankle injury. Considering that the next outfielders in line for a callup were Chip Ambres and Ricky Ledee, and the fact that Carlos Beltran is still feeling sore, it made sense for the Mets to pick up another outfield grazer with MLB experience.

At one time, Hermansen was a fairly decent prospect. He was drafted in the first round — tenth overall — of the 1995 draft, by the Pittsburgh Pirates, and was listed by Baseball America as their #1 prospect in both 1999 and 2000. In 1998, in fact, BA had him as the #13 prospect in all of a baseball — just a few spots below Todd Helton (#11) and way ahead of Roy Halladay (#38), Carlos Lee (#43), Derek Lee (#45), and Lance Berkman (#64), among others (how’s that for a grain of salt when predicting the future and value of youngsters such as Carlos Gomez and Lastings Milledge?). At the time, by the way, Hermansen was a second baseman. He was moved to the outfield eventually by the Pirates, as they saw him as a power hitter with a questionable glove and wanted to get him to the bigs a bit quicker. He hit 20 homers in AA as a 19-year-old and then 32 in AAA as a 21-year-old. However, he regressed after that big year, mainly due to poor plate discipline, and never showed anything special at the Major League level. He’s bounced around from the Pirates to the Dodgers to the Blue Jays to the Marlins organizations, and has a grand total of 492 big-league at-bats — hitting .191 with 13 HRs and 168 strikeouts (ouch!).

While there’s a possibility we’ll see him in a New York Mets uniform before the end of the season, there’s little chance he’ll make much of an impact. At age 29, he’s a minor-league lifer, a “AAAA” guy. About the only interesting note of his career is that he’s listed on the “Famous Mormon Baseball Players” website. Too bad, as he seemed to have such a great future ahead of him as a 21-year-old.

Back 112 to Go
Next Dale Murphy Rips Bonds