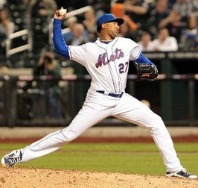 Last November, I thought it made sense for the Mets to consider taking Pedro Beato in the upcoming Rule 5 Draft, and was pleased when they did.

From the get-go, Beato impressed the Mets brass and eventually the fans with his cool composure, lively fastball, and above-average secondary stuff. Though his best pitch might be his sinker, using four seams and giving maximum effort allowed him to get his velocity into the 95-96 MPH range — something that managers and coaches like to see from a reliever. Beato was used frequently in the first month of the season, looking like a legit MLB pitcher, but wore down quickly, going on the DL with elbow tendinitis in early May (and shortly after a 3-inning appearance). He came back later that month but did not pitch nearly as well initially, but eventually got back into the groove, stringing together a number of good outings to close out June and then pitching very well in July. He struggled again in August and that carried through September, when his velocity dipped below 90 MPH. Beato blamed the drop to “fatigue”, explaining that pitching winter ball, then spring training, and a full MLB season without a break might be the reason. Strangely enough, Terry Collins was disappointed with this “excuse”, and ignorantly described the problem as a “dead arm”.

When it was all said and done, Beato’s season suggested promise. He was good enough to appear in 60 games, and at times showed bouts of brilliance. At worst, it looks like he can be a decent middle reliever. At best, who knows?

There was talk from Collins that Beato might be better suited to a starting role, and I have to agree. While I was impressed with Beato’s bullpen work, I don’t see him as a closer, but more importantly, he looks to have the potential to throw three “plus” pitches — a hard sinker, overhand curve with good 12-6 bite, and fading change-up. As a reliever, the max-effort approach may not be suited to him; partially because I’m not sure he can be effective through 60-75 games a season doing that, but also because his four-seamer is fairly straight. Though it’s a slightly slower pitch, his sinker is effective, and if he can gain consistent command of either the curve or the change-up, he’ll have enough to be at least a back-end starter at the big-league level. The best and fastest way to gain that command is through repetition, and he can do that more effectively logging 120-150 innings as a starter than he can 50-60 as a reliever. Even if he doesn’t pan out as a starter, his sinker, four-seam fastball, and one more secondary pitch will make him a valuable asset in any bullpen — he could turn out to be an effective tweener like Ramiro Mendoza was for the Yankees in the late 1990s / early 2000s. The big decision for the Mets will be whether to let Beato develop his repertoire as a starter in AAA in 2012, or to use him again in the big club’s bullpen. It might seem like a no-brainer to have him work on his stuff in the minors, but we don’t know how badly the Mets will need relievers next spring — and often, the “now” takes precedence over the “later”.