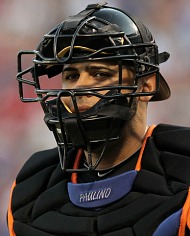 For a while, it was questionable whether Ronny Paulino would ever get going in a Mets uniform, and what kind of contribution he’d make. Visa issues kept him out of Port St. Lucie until Mid-March, and when he finally arrived, manager Terry Collins announced he’d be Josh Thole‘s backup. Not long after he arrived in spring training, Paulino was diagnosed with anemia, further setting him back — and then there was the remainder of his PEDs suspension to serve.

Despite these multiple issues that prevented Paulino from properly preparing for the 2011 season, things turned out OK.

Ronny Paulino is a large, surprisingly athletic man who has been a perpetual enigma — the tools are there for him to be an above-average all-around MLB catcher, but his weight, occasional laziness, and frequent lapses in focus have made him an unreliable entity. In 2011, he managed to control his weight (without the use of illegal diet pills), and though he occasionally displayed laziness and lack of focus, those weaknesses in character didn’t significantly hamper his performance.

Paulino only appeared in 78 ballgames, but when he did, he put the bat on the ball — particularly in the first half of the year, when he hit .320 with a .769 OPS. However, his season peaked in June, when he hit .364, and from there it was all downhill. By August, Paulino was a non-entity; he appeared in only 25 games in the last two months of the season.

Paulino seemed to get along well with the pitching staff, called a decent game, and was a fairly good receiver. He displayed a strong arm when attempting to throw out runners, but his meager 20% rate of getting them was far below his career average; I’m going to attribute that at least partially to Mets’ pitchers inability to keep runners close. As far as blocking pitches, Paulino showed an ability to do so well, but wasn’t always as effective as his skills suggested — was that due to problems in concentration / effort, or unfamiliarity with the Mets pitching staff? Maybe a bit of both.

Overall, Paulino’s season was clearly divided in half: the first-half version was surprising and promising, the second-half Paulino was a disappointment.

We don’t yet know if the Mets will offer arbitration to Paulino for 2012, and there is plenty of argument for both sides of whether to do so or not. On the one hand, when he applies himself, Paulino can be a good receiver — one that is, overall, better than Josh Thole. But the question — as it’s always been — is whether Paulino will play up to his potential. On the other hand, even if he does play as well as he can, of what value is that to the Mets over the long-term? Paulino will be 31 years old shortly after Opening Day, so he’s not part of the team’s rebuilding plans. The most value Paulino can have to the Mets is as a trading chip mid-season — which would require him to have a first half similar to last year’s.

As it is, the Mets have no legitimate catching prospects ready to audition at the big-league level, so if Paulino stays, he won’t be “blocking” anyone’s progress. There are currently no free-agent catchers under age 30, and the only other available backstops that might have similar trade value are Kelly Shoppach (who’s hovered around the Mendoza Line the last three years) and Chris Snyder (who has chronic, debilitating back issues). By virtue of a weak catching market, it probably makes sense to keep Paulino around. If he is a Met in ’12, my guess is we’ll see something similar to what we saw in ’11 — at this point in his career, Paulino “is what he is” — but we can keep our fingers crossed for another hot start that could make him a viable trading chip in July .

Back 2011 Evaluation: Mike Nickeas
Next Would You Trade Fernando Martinez for Chris Tillman?