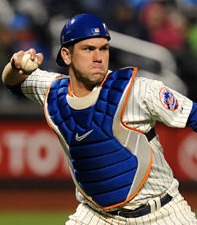 OK, here’s the post where at least half of Mets fans decide they hate me, because they think I hate Josh Thole.

Let’s get one thing straight: I like all catchers, therefore I like Josh Thole. Second, I like Josh Thole as a ballplayer because he works very hard, hustles, and gets as much out of his talent as he possibly can. Despite the fact I like Josh Thole, I can’t let that cloud my evaluation of him as a Major League catcher. That said, in 2011 Josh Thole did not make me believe that he is, or could become, a starting catcher on a championship club.

After drastically improving his defensive skills from 2009 to 2010, maybe I expected too much from Thole in 2011. Specifically, I wanted to see significant progress in his ability to receive pitches with soft hands, in blocking balls in the dirt, taking charge as an on-field defensive leader, and in handling pitchers. But he either regressed or stayed the same in all of those areas. Most disturbing, there was buzz that some members of the pitching staff preferred not to have Thole catching — whether it was due to a personality conflict, difference of opinion in game-calling, or lack of confidence in his abilities. We are not privy to those behind-closed-doors issues, but the fact they leaked out is not a positive sign.

On the bright side, Thole’s throwing technique to second base on attempted steals improved — thanks to improved footwork. His throws to second are now very accurate and he gets rid of the ball much more quickly than a year ago. However, his arm strength is below average and is unlikely to get stronger, so he absolutely must have perfect technique and the benefit of the pitcher preventing a good jump.

Offensively, Josh Thole was somewhat disappointing, especially for the most optimistic Mets fans who envisioned a .300-hitting, .400 OBP on-base machine. Though he had a good spring training — flashing a bit of homerun power — he started the season poorly, hitting only .226 in the first two months. However, he had a spectacular June, hitting .327 with a .450 OBP and .899 OPS. Unfortunately, Thole couldn’t keep up that pace, though he did have a strong August. His final stat line looks good on the back of a baseball card: .268 AVG, .345 OBP, .690 OPS, 3 HR, 40 RBI in 114 games. That’s not bad for a catcher who also brings something significant while wearing the tools of ignorance, but unfortunately, Thole doesn’t — he’s only adequate at best.

For me, Josh Thole either has to contribute a bit more offensively, or drastically improve at least one area of his catching, in order to be more than a back-up catcher. Where his skills stand right now, I wouldn’t consider him even in a platoon role — mainly because as a lefthanded hitter, he’d be handling the bulk of the duty.

Barring injury, Josh Thole is almost certainly going to catch more often than any other Met in 2012. There are few everyday catchers available as free agents and fewer available in a trade the Mets would make.

It could be a good thing; in a perfect world, Thole will get better and better the more he plays. But I’m concerned that he’s already taken his athleticism as far as possible with the old school receiving techniques that the Mets organization taught him; he might improve using different mechanics, but it’s highly unlikely he’ll have the opportunity to learn them. Further, Thole may not have the typical, strong personality of a backstop. While he works hard, plays hard, can handle the physicality of the position, and isn’t afraid to get dirty, his body language and actions display him more as a “follower” rather than a leader, and he seems to lack confidence; in fact, he’s borderline meek. Catchers usually have a more “type A” personality — one who takes charge and commands respect. That’s generally not something that can be learned — you either have it, or you don’t.

Back Mets Hot on Dotel?
Next How Long is Mets Rebuilding Plan?