The Lesson of Generation K

This question was emailed to me by “Dan B”:

Hey Joe, I keep hearing that we are basing this whole rebuilding phase around 2014 and our pitching prospects. Well, I lived through 1969 and our pitching prospects won us a World Series. I also lived through Generation K. I look at our current prospects and I see our top minor league pitcher is a guy the Giants gave away for two months of Beltran and another guy coming off of Tommy John surgery. Are these prospects really worth completely tearing down our team and rebuilding around or is this just an excuse not to spend money on the team now?

Dan, based on what we know about the Wilpons’ increasing mountain of debt combined with the actions we’ve seen over the last few months — rather than the doublespeak we’ve been fed — it appears that the “rebuilding phase” is likely an excuse not to spend money on the team now. 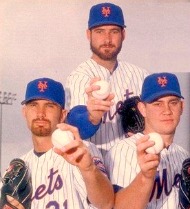 Personally, I’m not sold on Zack Wheeler just yet. But let’s pretend that I was sold on the idea that Wheeler is all that he’s cracked up to be: that means — as you suggest — the Mets are basing much of their hope on an extremely volatile, highly projectable, and tiny group of young men. All franchises that found success by building from within did so via strength in pitching, so we won’t even go into the dearth of quality position prospects in the Mets organization. Focusing on their pitching prospects, the cream of the crop is headlined by Wheeler, Matt Harvey, and Jeurys Familia, with subtext provided by Bradley Holt, Michael Fulmer, Robert Carson, and Jenrry Mejia. That’s not enough to bank on when you look back to the “top pitching prospects” of years past — such as the “Generation K” example you allude to.

As we learned from “Generation K”, many things can happen on a young pitcher’s road to the big leagues — most significantly the injury risk, but also other factors such as rate of maturity, psyche, making adjustments, etc. And as long as you bring up Gen K, we should consider this: at the time Paul Wilson, Jason Isringhausen, and Bill Pulsipher appeared on that SI cover in 1996, all three were much, much further along in their development than Wheeler, Harvey, et al. Pulsipher and Isringhausen, in fact, had already experienced half a season in MLB, and Wilson reached — and pitched effectively through 10 games — AAA.

Point being: Gen K, at the time, had comparable if not a higher collective ceiling than Wheeler / Harvey / Familia, AND, had already established themselves at a higher level than the Mets’ current triumvirate of young arms — yet, they still did not come close to reaching their potential in Flushing. In other words, counting on a few impressive AA arms is akin to rolling a pair of dice — there are too many variables to consider right now to build plans around them.

If the Mets had, say, 5 or 6 guys at or near the Wheeler / Harvey / Familia talent level, I might be more optimistic; there would be more room for error. Additionally, I’d want to see more prospects like Holt sprinkled at all levels — big arms with potentially high ceilings but who showed flashes but perhaps needed more seasoning, a new pitch, the right coach, etc. To build a team through the farm system, an organization needs both quality and quantity; sheer volume of arms is necessary to begin a successful, long-term run at providing legit MLB pitching to the big club. The Mets aren’t there yet — not even close. If one of Wheeler, Harvey, or Familia goes down with injury this season, it would have a devastating impact on the future outlook. Consider this: any of those three would have been comparable to Andrew Brackman at the same age, and the Yankees just this winter let go the once highly touted, big righthander — and no one even blinked, because the Bronx Bombers had a dozen “Brackmans” in their system at any one time over the past few years; they could absorb the loss.

So, again, I feel strongly that any story spun around the idea that the Mets will be contenders once Wheeler, Harvey, and Familia are “ready” is flawed. I’ll conclude with this: as recently as 2006 / 2007, many, many people believed that when Citi Field opened, the Mets starting outfield would consist of Fernando Martinez, Lastings Milledge, and Carlos Gomez. And those were outfielders, who are less susceptible to having their futures curtailed by arm injuries. I rest my case.

(Note: BloggingMets addressed this subject in a similar fashion a few days ago.)