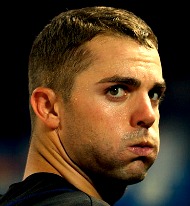 What’s scary, though, is that Neyer termed the deal as “crazy”. Here is what he said:

I’m not sure about the Brown-for-Wright swap; the jury’s still out on both players, and there’s definitely a non-zero chance that Wright will turn things around and Brown won’t ever become the player we’ve been expecting. But yeah, trading Brown and Worley and Aumont would be the height of folly. Because, as taco pal well delineates, Wright just isn’t the player he used to be.

Oh my … this is scary because, when looked at objectively, from the outside (in other words, as someone who is not a Mets fan), he’s right.

Neyer concludes with this:

I won’t suggest that Wright can’t again become a brilliant player. And even at +25 and -11 he’s a fine player. But the trend is clear, and between his performance and his age and his salary, you simply can’t trade three good young players for him.

Which is why the Phillies certainly wouldn’t do any such crazy thing.

Again, I can’t objectively, er, object to what Neyer suggests. On paper, David Wright is trending downward. As someone who has watched every single one of D-Wright’s games for the past six years, I know why the numbers aren’t where they should be (injuries, beanball, swing change). But the point is, people who aren’t as close as you and me — such as scouts and GMs from opposing teams — see Wright much differently, and much more pessimistically, than we do.

That’s a good thing and a bad thing, depending on your perspective. If you are of the ilk to completely demolish every last thread of the Mets roster and start from scratch, then this is bad news, as it means Wright won’t bring back a lucrative package of prospects — at least, not if / until he proves he can be the “real” David Wright during the first half of the 2012 season. On the other hand, if you are one of those people who would like to see at least one familiar face on the field next spring — someone who has a legitimate chance to represent the Mets at the All-Star game — then this news may please you, because it means that Sandy Alderson will be forced to hold on to Wright at least until July.

So which side are you on? Do you want to see David stay or go? Why or why not? And what do you think the Mets can get — right now — in return for Wright in trade? Post your thoughts in the comments.

Back New Year, New Beginning
Next The Mets: Seven Reasons to Stay Tuned in 2012