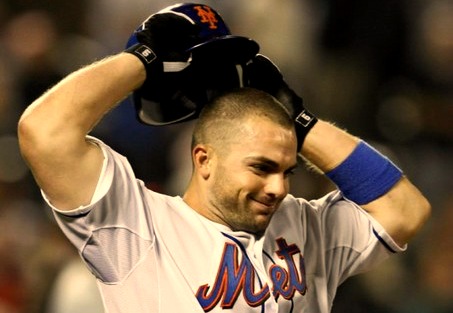 David Wright suffered through his worst professional season in 2011. I would argue that was a good thing for Mets fans.

Why? Because had he performed to his usual standard, Wright would likely be a valuable trading chip this winter, and have been pawned off for a plethora of prospects. Depending on your perspective, that’s either a great thing or a terrible thing. Me, I like the way David Wright plays the game, and I like rooting for him perhaps because he is one of the Mets few “homegrown” position players in their history who became a legitimate star. Watching him grow up and evolve from his rookie debut and seeing him through his ups and downs has established a strong fan-player bond that I’m not ready to give up any time soon. In short, D-Wright will be one of the very few reasons I’ll continue to turn on SNY to watch the Mets in 2012.

But enough about me, let’s discuss David. Again, 2011 was his worst season ever as a professional — probably in his life. I’m going to go on a limb and assume that playing with a broken back might have had something to do with his struggles — offensively and defensively. At the same time, we have seen him deteriorate on both sides of the ball ever since the Mets began playing in Citi Field — which is another issue that I can’t consider coincidental. After changing his approach in response to the cavernous home park dimensions in 2009, Wright when the other way around for 2010, this time changing not only his approach but his swing mechanics. Some also point to the Matt Cain beaning as a reason for Wright’s drop in offensive performance, and it’s hard to discount that theory; at minimum the beaning has contributed somewhat.

In addition to his offensive problems, Wright’s defense has steadily and dramatically regressed since winning a Gold Glove in 2007 and 2008. Many people feel that he didn’t deserve the hardware in those years, and though I can’t disagree, I can state confidently that Wright was a strong defender back then — maybe not the best, but certainly very good to excellent. His hard work to improve his defense beginning as a rookie in 2004 was well documented, and one has to wonder if winning the awards caused him to slack off a bit on keeping his defense sharp. Again, his broken back may have played a part in his poor defense — including lack of practice reps — but there isn’t any obvious excuse for his defensive regression prior the injury.

The fan in me expects a complete turnaround by David Wright next year, helped by being 100% healthy and the drawn-in fences. The realist in me wonders if Wright will go back to the swing mechanics that made him a star from 2004-2008, and if he’ll go back to the relentless defensive drills that turned him into an elite third baseman.

And then there’s the dark, ugly consequence of Wright returning to form: he’ll likely be traded as a result. Quite a conundrum, no? Root for Wright to do well, and I might be rooting for his exit. Yet, wishing him to perform poorly isn’t satisfying, either.

What say you? Would you like to see Wright make a comeback? Do you think he can? Are you hoping he’ll play at his best again because you want to see him have success, or so that the Mets can trade him away? Post your notes in the comments, please.

Back The Mets: Seven Reasons to Stay Tuned in 2012
Next Where Will Prince Reign?