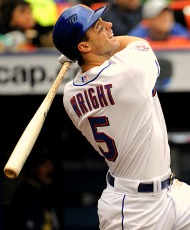 It has to be tough being David Wright; if he doesn’t win the Triple Crown and a Gold Glove while leading the Mets to the playoffs, his season is a disappointment.

OK, maybe it’s not that bad, but many fans have great expectations for the Mets’ answer to Derek Jeter. In some ways, deservedly so – he is, after all, the “face of the franchise”.

Year in and year out, Wright puts up numbers that place him among the top third baseman in the NL. But somehow, that’s not enough – he’s either unclutch, or too streaky, or otherwise underperforming. Unfortunately, that’s what comes with the territory of stardom in New York City.

But in 2010, some of the disappointment was warranted. For one, Wright’s defense fell off slightly compared to where he was in ’07 and ’08. On offense, several numbers took a disturbing dive – specifically his OBP (.354) and batting average (.283), both of which were career lows.

In addition to what the numbers stated, our eyes saw a marked difference in David Wright – changes that can be attributed to the cavernous character of Citi Field. For the second time in as many years, Wright changed his swing and his approach to account for his home park. In 2009, he cut down his swing slightly and focused on turning fat pitches into line drives instead big flies. That resulted in a drastic drop in homeruns but a soaring batting average – and criticism from many, who expected him to be more of a slugger. So in 2010, he lengthened his swing, adjusted it to provide more lift, and took more forceful cuts on most pitches in an obvious attempt to beat the vast distances of the Citi Field outfield fences. He succeeded in hitting more homeruns, but at the cost of 40 points in batting average, and nearly another 40 in OBP. Further, the notion that he is a “streaky” hitter had weight, as Wright cycled through hot streaks and cold spells not before seen by the young third baseman. In the past, when Wright was accused of being “cold”, it was usually just a temporary drop in power that didn’t affect his ability to put the ball in play and collect base hits at a .290 – .300 rate. But in 2010, when he went cold, he was ice cold – seemingly unable to make contact with the ball. Indeed, his 161 strikeouts and 27.4% strikeout rate were easily the highest of his career. Granted, part of Wright’s failures could be attributed to lack of protection in the lineup and his decision to try to carry the team on his shoulders. However, his response to those issues resulted in a less valuable David Wright.

Wright needs to get back to the swing mechanics and approach he displayed from 2006 – 2008, when he was a lock to get on base 40% of the time and consistently hit the ball with authority. Forget the park, forget the homeruns, forget who is hitting behind him and simply be the best hitter he can be. Easier said than done, of course, especially considering the outside pressures of NYC and the motivation of a potentially huge contract looming in the not-so-distant future. Despite the popularity of Moneyball and the acceptance of its basic tenets by most successful organizations, teams still pay top dollar for home runs, not OBP – maybe because players rarely receive a standing ovation for talking a walk. In any case, I’d much rather see a David Wright who can’t get to double digits in homers but vies for the NL batting crown, scores 110+ runs, and drives in another 100+. Whether he’ll go back to being that guy depends on what the new front office communicates to him, who they surround him with, and how David chooses to go forward with his mechanics and approach.

Read the 2009 Evaluation of David Wright