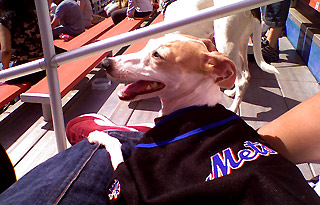 Please bring your Michael Vick jerseys to Shea on September 14th, as we will be burning a stack of them in centerfield during Dog Day at Shea.

OK, maybe the Mets officials and Shea security team won’t allow that to happen, but I can dream, can’t I? Sheesh … whatever happened to the good old days of burning at protests and demonstrations, in the name of good against evil? We can’t even say a bad word about a convicted criminal without a mongering NAACP leader jumping down our throats and turning it into a race issue. (And no, I have nothing against blacks, yellows, reds, whites, or Shawn Greens — but I do have a really major issue with “people” who execute unspeakable acts against domestic animals.)

Anyway, let’s get back to the nice part of this story … Dog Day at Shea! Bring your dog to the game on Friday, September 14th, in a 7:10 PM game against the Philadelphia Phillies. If you came to the event with your dog in April, then you know what a blast it is. Arrive to the park early, as you and your dog will have the opportunity to parade around the field on the warning track prior to the game (it’s about as close to players you’ll ever get — please don’t let your puppy pee on Scott Schoeneweis’ leg, OK?).

Tickets are $34 for humans and $5 per dog, and are good for unassigned seats in the bleachers (no, the dogs cannot sit in any other sections). All of the dog ticket proceeds, as well as a portion of the human fees, will be donated to the North Shore Animal League. Also, the NSAL will have their “Rescue Rover” mobile adoption vehicle outside the stadium.

Back Backtrack: Ollie Perez
Next Mets Game 138: Win Over Reds