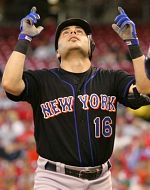 It was not a good day for Oliver Perez. But it was a great day for Paul LoDuca. And by the end of the game, Perez’s dismal performance was a distant memory.

Strangely, it didn’t start out that way for Ollie, who looked positively nasty in the first two innings, retiring the first six batters of the game. The Mets offense looked similarly dominating early on, scoring three quick runs on a LoDuca three-run homer in the second.

However, Ollie walked weak-hitting Alex Gonzalez to lead off the bottom of the third frame, and he came around to score on a double down the line by Norris Hopper. No big deal, as it made the score 3-1 Mets, but things got more and more difficult for Perez as the game wore on.

For the second straight inning, Perez walked the leadoff batter — in the fourth it was Ken Griffey. Brandon Phillips followed with a single, and Adam Dunn stroked another one up the middle to score Griffey and chase Phillips to third. Phillips scored with the tying run moments later on a Jorge Cantu sacrifice fly.

In the fifth, Perez struck out Hopper leading off, but Paul LoDuca could not handle the hard slider in the dirt and threw down to first — but Carlos Delgado couldn’t dig LoDuca’s throw out of the dirt. LoDuca was charged with the error, but Delgado clearly should have made the play. Jeff Keppinger followed with a double down the third base line to score Hopper with the go-ahead run, and took third when the throw home short-hopped LoDuca and careened to the backstop. Junior Griffey lifted a fly ball to score Kepp and make it 5-3 Reds. Perez proceeded to walk three straight batters before finally getting Jorge Cantu to ground out back to the box. Interestingly, the inning could have been over about five minutes earlier, when Ollie had picked off Brandon Phillips, but that time Delgado couldn’t get the ball out of his glove to make the throw to second. First he can’t get the ball in his glove, then he can’t get it out. Amazing.

But Ollie’s troubles would not keep the Mets down, as they came charging back in the top of the sixth. Ruben Gotay started things off with an opposite-field single through the shortstop hole, and took second on a wild pitch. After David Wright lined out, Carlos Beltran hit a ball to center that kept on carrying until it cleared the wall, making the score five-all. Starter Matt Belisle was replaced by lefty Bill Bray to face Delgado, who somehow managed to garner an infield hit on a trickler into the Bermuda Triangle between the second baseman, first baseman, and pitcher (the second baseman was playing in short rightfield, of course). Moises Alou rapped a single through the hole on the right side, and then Shawn Green drove a double into right-center to score both runners. LoDuca then blooped a single into shallow center to score Green easily, making the score 8-5.

Guillermo Mota came on in the bottom of the sixth and pitched another scoreless inning. Pedro Feliciano was not quite as effective in the seventh, allowing a run thanks to two bouncers through the vacated left side by Griffey and Dunn (the Mets employed the “shift”) that sandwiched an infield single by Phillips. No one hit Pedro Lite particularly hard — that’s just the way the ball bounces sometimes (yuck yuck).

In the eighth, Moises Alou led off with a hard single up the middle against reliever Todd Coffey, and was replaced at first by Endy Chavez. With Chavez running, Shawn Green blistered a ball down the first base line, putting runners on the corners. Green stole second, and a few moments later LoDuca lifted his second three-run homer of the game into the leftfield stands, making the score 11-6.

Scott Schoeneweis came on in the ninth to allow Brandon Phillips’ 27th homer of the year, tying the Reds’ record for homers by a second baseman (held by Joe Morgan, who hit 27 while winning his second MVP in 1976). However, Shawn Green and David Wright made excellent back-to-back web gems on hard-hit ground balls to end the inning.

LoDuca finished the game 3-for-5 with two runs scored and 7 RBI. I had him on the bench on my fantasy team (crap!). One must wonder if Paulie will consider Cincinnati as his next stop after becoming a free-agent after this season — he sure seems to like the way that ball flies out to left.

Just when you were ready to write off Shawn Green, here he comes with a 3-for-5 day of his own, scoring three runs and driving in two with his 28th double of the year.

Carlos Delgado runs so slow, it’s hard to tell the difference between him sprinting and jogging. Sometimes I think he’s dogging it, then on the replay can see that he’s really pumping his arms and running full speed. Other times I think he’s moving about regular speed, then realize he’s lallygagging. It’s kind of like deciphering the speed between Brian Lawrence’s fastball and changeup. Delgado, by the way, also had three hits, with two runs scored. However, he seemed to strain something in his right hip while swinging in his last at-bat. Let’s hope it’s nothing serious, now that he’s finally in the groove.

Ruben Gotay had one hit and three walks, and scored once.

Strangely, David Wright and Jose Reyes were a combined 0-for-10.

Also strange, this was the first time all year the Mets won five in a row.

Ollie’s command was way off, his velocity was down under 90, and his face and body language expressed his anger and discontent with himself. To me, it looks like his mechanics are a mess again — well not exactly a mess, but his motion is so complicated it only takes a slight error in timing to screw everything up. On most of his pitches, he’s breaking his hands a fraction of a second too late, and after his back side is already collapsing. As a result, his body is slightly ahead of his arm, but he’s somehow making an adjustment to keep the front side from flying out (most of the time). But, because the synchronization of arm and weight are just a hair off, he ends up throwing with more strain on his arm — in effect, relying more on his arm and less on his momentum to power the ball. That would explain the drop in velocity — when his arm and legs are in sync he can bring it close to the mid-90s. Hopefully, Ollie and The Jacket can fix the issue before October — the Mets may need him to pitch big against lefty-heavy lineups, as either a starter or a reliever.

Sandy Alomar was promoted to give the Mets a third catcher, as Ramon Castro continues to recover from his injury. Nice move — Alomar definitely deserved the callup, as he did a nice job behind the plate and gunning down runners in his limited playing time.

Where the heck was Willie Collazo and/or Philip Humber at the end of this game? With a five-run lead in the eighth against a last-place team, it seemed an appropriate time to give one of them a shot. When else? Does Willie Randolph really think one of these kids will blow a five-run lead in one inning? I guess we’ll have to wait until the Mets are eight up on the Phillies and have a ten-run lead in the ninth inning of a game before we see either of these two. Too bad, because if either of them were given a shot, Willie might find a useful arm for the postseason.

Hard to understand why Todd Coffey is so ineffective as a Major League pitcher. He’s an imposing figure at 6’5″ 255, and brings it north of 95 MPH with a pretty decent slider. He’ll turn 27 next week, so time is running out for him to find himself. Obviously, his problem is that he’s so hittable — I guess his ball has no movement?

The Reds, by the way, currently have 17 pitchers on their roster.

Side note: the Brewers acquired LOOGY Ray King from the Nationals in a trade for a PTBNL. How did a situational lefty with King’s resume pass through waivers — especially with rosters expanded? You’d think at least the Yankees or the Phillies would have put in a claim.

The finale in Cincinnati begins at 12:35 PM, and pits John Maine vs. Tom Shearn (whoever that is). If Anderson Hernandez is not promoted, expect to see Ruben Gotay at shortstop, Mike DiFelice behind the plate, and both Endy Chavez and Marlon Anderson in the outfield. There’s also a possibility Shawn Green starts at first to give Delgado a blow. Who knows, maybe we’ll even see Jeff Conine start at third to give D-Wright a well-deserved rest as well. It would be a nice time to give the Mets’ dual MVPs a breather.