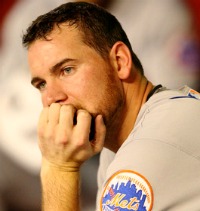 Maybe nothing. After all, Mike Pelfrey had a terrible spring training back in 2010, and that turned out to be arguably his best season as a Major Leaguer. And in truth, Pelfrey has a bad spring every year — his career ST ERA is 6.90, with 3 wins and 14 losses.

But this year, neither Pelfrey nor the Mets can afford to have a sour spring. And there’s something different about Pelfrey’s struggles this March. Specifically, his velocity is significantly down. He’s throwing so slowly that the Mets coaching staff asked him to “throw harder” in this latest contest.

Here’s the report from Adam Rubin of ESPN-NY:

After registering only 87 mph in his previous outing, Pelfrey said he overthrew the ball Sunday, trying to up his velocity. The staff had asked him to throw harder to get his arm strong for the season.

Pelfrey said he ended up “yanking” his sinker as a result — meaning he did not get on top of the baseball to drive it downward. Instead, Pelfrey explained, he created more of a Frisbee action by getting on the side of the baseball and not finishing the pitch. It stayed flat and in the middle of the strike zone.

Those last two sentences are particularly interesting to me, considering the mechanical flaw that Pelfrey has been struggling with since July 2010. If you weren’t a MetsToday reader back then, in a nutshell, Pelfrey began hunching over during his leg lift, which in turn caused his balance to lean toward third base, which in turn caused more of a side-to-side momentum — exactly the kind of motion that one might use to, um, throw a frisbee. Why this flaw began, no one is sure, but it’s probably not a coincidence that Pelfrey suffered a rotator cuff strain around the same time that the flaw developed. My bet is that Pelfrey began the hunch-over and over-rotation as a response to the shoulder pain; it’s common for a pitcher to believe he can rotate his hips a little more to take some pressure off the shoulder (in fact, the result is usually the opposite).

So now we have a situation in which Pelfrey is throwing with low velocity, and when asked to “ramp it up,” he responds by most likely over-rotating, rather than getting taller and using both the advantage of gravity / leverage and back-to-front momentum. Is it because Pelfrey doesn’t understand the laws of physics discovered by Isaac Newton? Or is it because his shoulder is still barking, and he simply can’t get it to rotate as quickly as he used to?

I haven’t had the chance to see any video of Pelfrey this spring, so this is all guesswork. But, based on the comments that have been published by the beat writers, Collins, and Pelfrey, I’m going on a limb and going with my above theory. If Pelfrey doesn’t have a shoulder problem, then his mechanics are royally messed up. There is no other logical explanation for his inability to throw 90+ MPH with decent command — he should be able to do one or the other, even if he’s still getting in shape.

Back Notes: Mets vs. Braves
Next Mets Owners Settle with Irving Picard