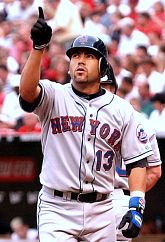 Hopefully you do not suffer from triskaidekaphobia, because our focus today is on 13 — the uniform number worn by one of the all-time great Mets, Edgardo Alfonzo. (Oh, and look at that … the Mets’s magic number is ALSO #13 … huh.)

OK, Fonzie’s greatness was brief — a six-year run from 1997-2002 — and it wasn’t THAT great when you look at his numbers during that span. But anyone who was a Mets fan at that time would quickly point to Alfonzo as the team’s quiet leader and most valuable player.

His blue-collar approach to the game and clutch hitting endeared him to fans and commanded the respect of this peers. Managers around the NL routinely mentioned Alfonzo as one of the players they’d least like to see at-bat at the end of a tight ballgame, and he was one-fourth of “The Best Infield Ever” — a Sports Illustrated cover story.

Further, Fonzie’s team-first attitude could not be matched. Signed as a shortstop, and playing most of his short minor league career there, Alfonzo happily shifted to fill a need at second base in his rookie year (1996) with Rey Ordonez already entrenched at his position. The next year, the Mets imported Carlos Baerga to play second, and asked Edgardo to move to third. Fonzie flourished at the hot corner, batting .315 and developing quickly with the glove. He had another strong year in 1998, and his defense had improved to the point that there were whispers about him being a Gold Glove candidate. In 1999, however, the Mets brought in Robin Ventura to play third, and Alfonzo gladly moved back to second. It turned out to be a nearly magical year for the Mets, who captured the wild card and advanced to the NLCS behind the bats of Ventura, Mike Piazza, John Olerud, and Alfonzo, who had a breakout season — 28 HRs, 108 RBI, and a .304 batting average. It should be noted that those 108 RBI came with Alfonzo batting second in the lineup almost exclusively — quite a feat for someone at the top of the order.

To being the 21st century, Alfonzo had perhaps the best season of his career, batting .324 with 24 HRs and 94 RBI, leading the Mets to a World Series appearance against the Yankees. In 2001, however, he slumped badly, suffering from back problems, and hit only .243. Teammate Ventura also had a down year (his second in a row), and in the offseason GM Steve Phillips pulled off what at the time appeared to be a miraculous trade, but would eventually go down as one of the biggest busts in Mets history — the deal for Roberto Alomar. Since Alomar was coming off a career year and was a perennial Gold Glover (some say the best second baseman of all-time), Fonzie was asked to shift again, back to third base. As with the previous moves, Alfonzo had no quibble, and was simply happy to have a player of Alomar’s caliber joining the club. Though Alomar had a nightmare of a year, Alfonzo returned to form, batting .308 — though with diminished power due to his chronic back issues. After the season, he was stunned to find out that the Mets were not interested in bringing him back, and allowed him to test the free-agent market. Fonzie sadly signed with San Francisco — the one move he never wanted to make.

As it turned out, the Mets were correct in their assessment, as Alfonzo’s career took a nosedive. At age 34, he’s still trying to make a comeback, having played this past summer with the independent Long Island Ducks. When asked in July if he might like to return to MLB as a Met, he replied,

“I think that would be the best thing to happen to me,” Alfonzo said. “I always wanted to return as a Met. I think I’ve been a Met all my life. That would make my life happy, getting one more chance to return to the organization where I started, with my regular team.” (credit: Jim Hague, The Hudson Reporter)

We’re all pulling for you, Fonzie!

Back Mets Game 144: Loss to Braves
Next The Marcos Carvajal Mystery