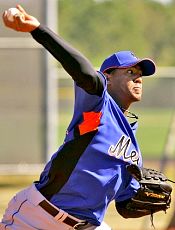 At the beginning of spring training — February 16th, to be exact — the Mets quietly claimed righthanded pitcher Marcos Carvajal off waivers from the Tampa Bay Devil Rays. Steve Schmoll was dropped from the 40-man to make room for the 23-year-old fireballer.

Carvajal has been a nomad since signing his first pro contract with the Dodgers in 2002, getting traded four times and snapped up in the Rule 5 draft once before being waived away by the Rays. In addition to Tampa Bay, Los Angeles, and the Mets, he’s also been property of the Brewers, Mariners, and Rockies. In all that time, he’s spent one year in the Majors — 2005. As a 20-year-old for Colorado, he pitched in 39 games (all relief), posted an 0-2 record with a 5.09 ERA and 47 strikeouts in 53 innings. He also had one hit, a two-run single.

Sandwiched around 2005 were promising seasons in the minors, riding a fastball that is consistently in the mid-90s and nears triple-digits. As with most young flamethrowers, his control has been an issue; he’s walked 177 batters in 346 minor league innings.

The Mets assigned him to the AA Binghamton starting rotation to get lots of innings, hoping the volume would help him learn to command his electric stuff. The results were mixed, and less than impressive: 119 innings, 120 hits (including 13 homers), 63 walks, 92 strikeouts, and a 5.22 ERA. Those numbers hardly scream dominance, but you have to take into consideration the fact that he hadn’t started a pro game since age 17. Further, he’d never thrown more than 72 innings in a season — which explained his shift back to the bullpen in mid-August. By pulling him out of the rotation at the end of the year, it would appear that the Mets organization was showing some concern, and offering protection to the young enigma.

However, on September 7th, to make room for Carlos Gomez on the 40-man roster (Gomez was coming off the 60-day DL), the Mets DFA’d Carvajal. A curious move, as 23-year-olds who can touch 100 MPH don’t grow on trees, and the Mets just lost one of those — Ambiorix Burgos — to Tommy John surgery. Carvajal seemed pegged to be a pet project of Rick Peterson for 2008 — similar to what was done with Jorge Julio in ’06 and with Burgos earlier this year. With his heat, and the fact he was already on the 40-man, there was at least a hint of speculation he might come up in September to see what his stuff looked like first-hand, against MLB hitters.

Instead, the Mets have ten days to waive, trade, or release Carvajal. My guess is that they’re banking on him clearing waivers, and re-signing him as spring training invite over the winter. However, looking at the players currently on the Mets’ 40-man, the move makes little sense.

For example, Brian Lawrence is still on the 40-man. Please re-read that last sentence so it sinks in. And as you noticed in Tuesday night’s game, Aaron Sele is also still on the team. Now, maybe I’m nuts, but I’d much rather control the rights to a 23-year-old who throws 95 — even one with the mediocre numbers Carvajal put up — than either of the equally useless Lawrence or Sele. Further, the Mets still have both Damion Easley and Jose Valentin on the 15-day DL — yet it’s been announced that Valentin’s season is finished and Easley’s return is less than likely. Even if either of them are able to make it back by October, would they have any value to the postseason squad? Are you going to drop Marlon Anderson or Ruben Gotay to make room for either of these guys — especially with them being rusty and limping? Probably not.

Obviously, the Mets know their players better than we do. Maybe Carvajal has an injury that no one knows about, or perhaps his attitude is less than stellar. It could simply be that the Mets’ organization doesn’t see the eternal enigma having the aptitude to develop beyond his current skill level. From the outside, though, the move is a mystery.

Of course for every Mariano Rivera story, there is a Jorge Julio, Matt Lindstrom, and Henry Owens. But isn’t it worth the price of a Brian Lawrence or Aaron Sele to see how the story turns out?

Back No. 13: Edgardo Alfonzo
Next Mets Game 145: Win Over Braves