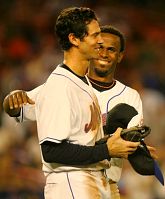 John Maine took a step forward, and deserved to win the game. And though he wasn’t credited with the victory, at least the Mets won.

Maine pitched six strong innings, allowing only three hits, three walks, and one run, striking out five. It was a fine performance, and necessary, as he needed to outpitch John Smoltz — who pitched a fine game himself.

Maine left the game after 102 pitches with a 2-1 lead, thanks to a fifth-inning solo homer by Marlon Anderson. Carlos Beltran drove in the first run of the game in the third frame with a sac fly to score Jose Reyes (now, that’s more like it). After Maine exited, Lastings Milledge — pinch-hitting for Maine — led off the bottom of the seventh by blasting a triple to rightfield past a diving Jeff Francoeur. He scored soon after when Reyes reached out and poked a single through the middle of a drawn-in Braves infield, giving the Mets an insurance run. Jorge Sosa held the lead through the seventh, and after Aaron Heilman got two quick outs in the eighth, things were looking good. However, Heilman then walked Edgar Renteria on four pitches and allowed a single to Mark Teixeira, putting runners on the corners. At that point, manager Willie Randolph panicked — plain and simple.

Instead of leaving Heilman in to clean up his own mess, Randolph turned into Gene Rayburn and thought he was hosting the Match Game. If only Brett Somers were in the dugout to laugh at his moves … or Charles Nelson Reilly to finish a “Dumb Donald” joke. Instead, Rayburn … er, Randolph … had not Reilly or Somers but Feliciano and Mota to call on. Unfortunately, neither could finish the question, and by the end of the inning, no one was laughing.

Feliciano was rushed in to face Brian McCann, who walked on five pitches to load the bases. That failed execution prompted Willie to exit the dugout again and summon Guillermo Mota, who jogged in to a chorus of boos from the hometown fans. Why Randolph thought this situation — facing Jeff Francoeur with the bases loaded — was ideal for Mota, is anyone’s guess. To Mota’s credit, he got ahead of Francoeur and nearly struck him out, but a potential strike three foul tip barely evaded Paul LoDuca’s mitt. Moments later, Francoeur poked a ball in between David Wright and Jose Reyes to score two runs to tie the game and take the victory away from Maine. Again, in Mota’s defense, it was a good pitch in a good spot, and the only other batter who digs that out is Vladimir Guerrero. Luckily, Mota regrouped to strike out Andruw Jones before any more damage could be done.

But the score did not remain tied for long. Once again the Mets answered the bell — something that’s become a common occurrence the last few weeks. Carlos Beltran led off the inning with a single and stole second base to start the process. Moises Alou then grounded out to third, and an alert Beltran took third as Yunel Escobar threw to first. Shawn Green followed with a base hit into right-center to regain the lead.

Billy Wagner came on to pitch a perfect ninth, expending 14 pitches in earning his 34th save of the season.

Shawn Green continued his dominance of John Smoltz, with two more hits against the future HOFer in addition to his game-winning single. He went 3-for-4 on the evening.

Oddly, due to MLB scoring rules, the victory was officially “earned” by Guillermo Mota. He’s gaining on Heilman for the 2007 vulture award.

Reyes had two more hits and stole his 76th base. He’s warming up, folks.

If Willie Randolph had left Heilman in the game, and Heilman had blown the lead all by himself, I MIGHT have crucified Willie for leaving Heilman in with Feliciano ready to save the day. But probably not. Regardless, the Mota move remains a head-scratcher.

Day off on Thursday, then the Phillies come into Shea for a three-game set — the last regular-season series between the teams. Friday night’s opener begins at 7:10 PM and happens to be Dog Day at Shea, and Tom Glavine is scheduled to start against — you guessed it — Jamie Moyer.

Back The Marcos Carvajal Mystery
Next Number Eleven