The Mets played a contest against the Astros, who were recently banished to the league that plays an adulterated version of the national pastime.

Nice three-inning start by Jeremy Hefner, who may very well be taking over Johan Santana‘s spot in the rotation.

Ike Davis continues to appear in mid-season form, hitting, running, and fielding at the top of his game. I know I should be happy about this, but there is a part of me that is like, “no! don’t waste it now! Save some for later in the spring!” It’s a negative outlook, but I view Davis as a streaky player — if he’s hot, he’s REALLY hot, but if he’s cold, well, he’s ice-cold. With that in mind I’d rather he be really hot in early April instead of early March.

Lucas Duda hit an opposite-field, RBI double in the bottom of the third inning to help chase Astro pitcher Alex White from the game. Seeing Duda drive the ball to left field is a good sign — he often hit the other way when he previously enjoyed success — and could signal his return to emergence as a beast in 2013.

Carlos Pena hit an opposite-field, solo homer in the top of the fourth inning. Seeing Pena drive the ball to left field is a good sign — he often hit the other way when he previously enjoyed success — and could signal his emergence as a beast in 2013.

Hmm … will they both have big seasons based on hitting the ball the other way off an inexperienced 24-year-old on a windy, early March afternoon in Port St. Lucie? Maybe, maybe not.

Speaking of Pena’s wind-blown blast, it was hit off Robert Carson, and preceded a walk issued to another lefthanded hitter, former Met Fernando Martinez. Not the type of outing that helps Carson’s case as a LOOGY in the Mets’ bullpen. In 4 games and 6 innings so far, Carson has allowed 8 hits, including 3 homers. It’s still very early, but that’s not a great start. On the bright side, he has a chance to show improvement over the next few weeks and finish strongly; when the final 25 are chosen, it could be better to have good performance closer to the end of March and fresh in the minds of the Mets coaching staff. Of course, that’s dependent on Carson righting the ship by then. 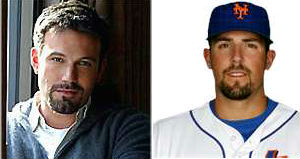 If a movie is ever made about the Mets’ 2013 spring training season, I think the part of Zach Lutz should be played by Ben Affleck.

Wilmer Flores had one hit in three at-bats, but his swing is looking less than powerful. He opens his hips a little early, cuts himself off at contact, and rolls over his wrist immediately after contact, which means his hands are slowing down before making contact. Ideally, he’d be making contact with the ball and then extending his arms toward the pitcher — thus accelerating the swing at contact. It’s kind of like “running through” first base on a grounder rather than “running to” first base; if you run TO the base, you slow down the last few feet leading up to the bag, but if you run THROUGH the bag, you’ll still be running at top speed as your foot touches the base. It’s the same thing with hitting — you want to hit THROUGH the baseball. What Flores can do to fix this is focus on extension after contact.

Collin McHugh — whose success depends on pinpoint control — had trouble with his command, exposing batterymate Landon Powell‘s lack of mobility and quickness behind the plate. I really want to like Powell as a ballplayer but he’s too slow back there.

The Astros look pretty bad. I know it’s spring training, and there are a number of inexperienced rookies and washed-up veterans eating playing time, but it appears that Newark, NJ native and Weequahic High School grad Bo Porter has his worked cut out for him as manager of the ‘stros. Houston needs to vastly improve their fundamentals, their offense is below-average for an NL club, and I shudder to think what Adulterated League hitters will do to their pitching — which would be among the worst if they remained in the NL. Last year the Astros scored less runs per game (3.6) than anyone in MLB, and allowed the second-highest runs per game in the NL (4.9) — and again, that was playing against primarily NL teams. By moving them to the AL, Bud Selig essentially handed the Astros a death sentence. If he was so hell-bent on having the same number of teams in both leagues, a more logical solution would have been to drop both Houston and Miami into AAA — neither team is going to provide MLB-quality baseball in 2013.