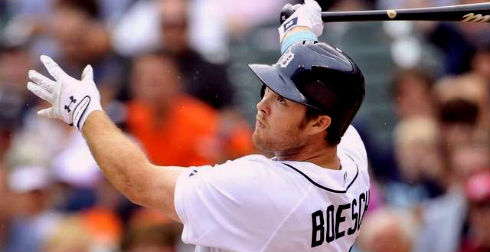 The Detroit Tigers have released outfielder Brennan Boesch. Considering the state of their outfield, should the Mets sign Boesch?

On the one hand, Boesch was terrible in 503 plate appearances for the Tigers in 2012, posting a .240 AVG, .286 OPB, and .659 OPS. He did, however, hit 12 homeruns, which would have been the fifth-highest total on the Mets last year. Still, that’s not much production for a player whose strength is supposed to be his bat.

Boesch busted into MLB like gangbusters as a 25-year-old in 2010, hitting .345 with a .973 OPS in May and .337 with 8 HR, 23 RBI, and a 1.025 OPS in June. Seemingly everyone in baseball was talking about Boesch during that time, projecting him as a future All-Star and long-time mainstay in Detroit’s lineup. Boesch’s performance in the bigs was a welcome surprise for the Tigers, but not completely out of the blue, considering he had hit 28 HR in AA the previous year.

After June 2010, however, things changed drastically for Boesch. He batted a paltry .163 with .458 OPS in the second half as the league found the holes in his swing and he struggled with an injured thumb. However, Boesch returned healthy and made adjustments in 2011, hitting .283 with 16 HR and .799 OPS in a platoon role covering 472 plate appearances.

Unfortunately, things didn’t work out for him in his opportunity as an everyday player in 2012. After a slow start this spring, the Tigers decided to cut him loose.

Before you make any decision on Boesch, I’m curious — does he remind you of anyone currently vying for a corner OF spot for the Mets? Boesch is 6’4″, 235 lbs., defensively challenged, 28-year-old, lefthanded-hitting outfielder from California who enjoyed a meteoric rise in his rookie year, suffered an injury that affected his performance after that rise, and has since struggled with confidence. Hmm … I swear I’ve heard this story before …

Maybe Boesch can find his confidence — and his stroke — again. Then again, maybe that two-and-a-half-month flash of brilliance as a 25-year-old was his apex. On the one hand, the Mets can use all the help they can get in the outfield, especially in the form of someone with power potential. And if you believe Lucas Duda can revive himself, then you have to have some hope for Boesch, as well. On the other hand, bringing in yet another outfielder may only further muddle already murky waters.

What’s your thought? Should the Mets bring Boesch in? Why or why not? Answer in the comments.

Back Who is Leading the Mets Center Field Race?
Next Brewers Extend Carlos Gomez