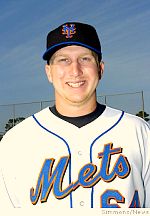 As we’ve gone over in the past few weeks, the Mets don’t have much in the way of trading chips, with most being prospects that may be overvalued by the Mets brass.

That said, here is an update on Mike Carp from Baseball America — Carp is currently playing for the Scottsdale Scorpions in the Arizona Fall League:

Several scouts arenâ€™t sold on Metsâ€™ first baseman Mike Carp, a ninth-rounder out of high school in 2004. “I don’t believe in the power at all,” said a scout from a National League club. “He doesn’t make good, hard contact, he’s inconsistent in his approach and swings and misses too much. And he’s not going to play anywhere else but first base. His performance here defines what he is for me.” In 43 at-bats, Carp is hitting .256/.333/.349 with 10 strikeouts.

OK … not such a glowing report, and his stats aren’t anything to write home about. But, the specific quote is from one nameless scout, and scouts have been wrong before. Unfortunately, negative buzz can travel just as quickly as positive buzz (if not more quickly), and Carp was a disappointment the entire season. After impressing the Mets staff in spring training, Carp took a step backward by batting only .251 with 11 homers in 359 at-bats in AA Binghamton. However, his season — and his hitting — were affected by a broken finger suffered in early May.

Sure, his stats were probably a result of the injury. And when he returned from the injury, it likely took him a while to get back in the swing of things. And he likely pressed a bit when he was slumping. But guess what — none of that matters to scouts from other teams when evaluating talent, and a .250 hitter in AA doesn’t bring back MLBers like Danny Haren or Johan Santana.

Personally, I think it’s too early to give up on Carp; he’s only 21 and has made big jumps since joining the organization in 2004. There’s every reason to believe he’ll bounce back with a stellar 2008 and reestablish himself as a top prospect. But right now, his value is at a low point, and therefore won’t be much help as a trading chip during this offseason.

And maybe that’s a good thing — it could be a blessing in disguise. Because Carp’s value is currently low, the Mets may be more inclined to keep him around. For comparison: Jeff Bagwell (Red Sox), Travis Hafner (Rangers), and David Ortiz (Twins) are three first basemen who were traded or let go by their original team because their value had plummeted. Not saying Carp is the next “Big Papi”, but the point is, you just never know.

Back Omar: No Message for Rudy
Next Updates: LoDuca, Castillo, Duaner