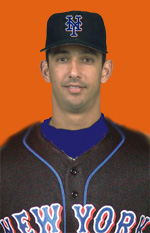 Bill Madden at the Daily News claims that Jorge Posada is high on the Mets’ wishlist:

“Mets sources say GM Omar Minaya has identified Posada at the top of the team’s list of free agent targets. Like he did with Pedro Martinez before the 2005 season, Minaya might be willing to go above and beyond to secure the rights of a possible Hall of Famer.

If the Mets offer Posada four years – or possibly five – it would leave the Yankees in a difficult spot, as they would be committing more years than they wish to a catcher who will turn 37 next summer.”

Five years? C’mon Bill, what are you smoking? The Mets are not going to offer a five-year deal to ANY catcher over age 30 — unless Johnny Bench comes out of retirement with bionic knees and an undetectable “Bonds” cocktail of HGH+steroids.

“Industry sources are becoming increasingly baffled at the sluggish pace the Yankees have taken with the five-time All-Star catcher. Even though Posada has filed for free agency, the Bombers are in an exclusive 15-day negotiating rights period with the catcher but apparently have not presented an offer since the end of the season.”

Hmm … I imagine those “industry sources” have been living under a rock for the past two weeks. The rest of us have noticed that Yankee management has been a bit, um, busy. While Posada no doubt is high on their list of priorities, I would imagine that 1. firing Joe Torre; 2. hiring his replacement; and 3. the A-Rod situation all were just a wee bit higher on the list. And before they get to Posada, they have to decide whether to exercise the option on Bobby Abreu (I think today is the deadline) and figure out what to do with Mariano Rivera. Yes, I’m sure that Brian Cashman is pretty good at “multitasking”, but I also think his focus has been 100% on the Torre – Girardi – A-Rod issues — there are only 24 hours in a day.

However, if the Yanks do continue to drag their feet, it could help the Mets land Posada. Again, I don’t see any 5-year deals being offered; in fact, I’d be stunned if a 4-year contract was mentioned. My guess is that the Yankees will offer Jorge a very fair two-year contract before November 13th, and he will take it — unless he thinks he can get, and desires, a three-year deal. In that case, he’ll go to the open market, the Mets will make a nice 3-year, $40M offer — maybe throw in a club option for a fourth — and the Yankees will have no choice but to match it. And they will match it — the Yankees will not be outbid by anyone, particularly not by the Mets and especially not for a beloved, longtime Yankee (see: Williams, Bernie, 1998). Then it will be up to Jorge: either retire a Yankee, or be offended by them for not treating him respectfully.

Back Alou and Easley in 2008
Next Considering A-Rod