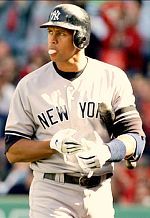 I really didn’t want to bring up A-Rod in a conversation that included the Mets. But, it appears that the Mets are at least considering going after the $30M-dollar man — if Omar Minaya’s meeting with David Wright is any indication.

According to Minaya: “I reached out to David and spoke to his representative a little bit,” Minaya said. “With Alex out there, the questions are going to be ‘are the Mets going to be involved?’ I’ve let the representatives know what’s going on and what the thinking is. With a free agent like that, there’s going to be speculation.”

The money shouldn’t be an issue for the Mets. After all, Citi Field promises to bring a windfall of cash, and SNY should grow into a billion-dollar venture before long. And if Buster Olney has the correct facts, MLB.com profits have generated $30M for each team — right there is enough to cover A-Rod’s salary.

Where Rodriguez would play really isn’t an issue, either. You make room for a player of his caliber. Presumably, A-Rod would remain a third baseman and David Wright would change positions — possibly to second base or the outfield. There’s talk he’d move to first base. Not sure why they wouldn’t leave D-Wright where he is, put Rodriguez back to shortstop and move Reyes over to second — Reyes has played there before and did admirably. If the Mets were willing to move Jose for Kaz Matsu, I don’t see why they wouldn’t move him for arguably the best shortstop of all-time. And yes, A-Rod would be at least as good defensively as Reyes at short, if not better.

The issue, rather, is, do we want to see Alex Rodriguez in a Mets uniform?

The last time he was on the market, I had hoped the Mets would at least make a decent offer — though in hindsight I’m glad they signed 17-year-old shortstop Jose Reyes that year instead. This time around, I’m hoping the Mets do not enter the bidding whatsoever, except for the express purpose of driving up the price for someone else.

Can the Mets use a guy in the lineup who is almost certain to hit 45 HRs and drive in 130 runs — in an “off” season? Of course. And though you can say all you want about his greediness, you can’t question his preparation and the way he plays the game. He does everything well, plays as hard as anyone, and produces at a level no one else can match. But in the end, he’s a mercenary.

A-Rod says that he wants to win a World Championship above all else, and he probably believes that’s the truth. The reason he’s leaving the Yankees could be because he doesn’t see them returning to the postseason anytime soon — not with all those young pitchers, the bullpen in a disarray, and the possibility of Jorge Posada, Mariano Rivera, and Andy Pettitte leaving. At the same time, it’s hard to find another big league team willing to spend $225M+ to almost guarantee that they make the playoffs. Who else has a hands-down better chance to get to the playoffs next year, other than the Yankees? Maybe the Red Sox? By hook or crook, with or without Rodriguez, the “Evil Empire” will do everything in their power to push their team into yet another postseason appearance. So is a World Series ring really his desire, or is it more Kobe Bryant-like? In other words, does A-Rod really want to win a ring on a team where HE is “the man”? After all, on the Yankees, he’d always be second to Derek Jeter in the hearts of the fans and the ink of the media.

Right now, the Mets’ “face” is David Wright. If A-Rod wears orange and blue, that would have to change, immediately. There are already indications that D-Wright would be the one to move to make room. Rodriguez would take not only Wright’s position on the field, but also his position as the face of the franchise. He’ll be on the cover of the media guide, in the Mets commercials, on the SNY opening highlights. It will be A-Rod’s team.

That doesn’t sit well with me as a Mets fan. Not because I want to see David Wright as the face but rather because I don’t want A-Rod as the face. In many ways, Wright is only one of the “faces” — he shares the spotlight with Reyes, and to a lesser degree with the Carloses Beltran and Delgado. There’s room others on Wright’s stage, and in fact there’s no hard indication that it even IS Wright’s stage. Yes he grabs more and more public attention every year but at the same time you still see David’s grin along with a Mets hat, or a Mets jersey, or the NY logo — the team is not lost. If Rodriguez comes on board, the Mets turn into a typical NBA team — it’s all about the superstar first, and the rest of the team comes in second. Someone referred to A-Rod as a “24 and 1” guy, and the tag is apt.

Personally, I hope A-Rod is a non-issue. I don’t care how good he is, I’d rather the Mets take their chances without him. To me, adding A-Rod would completely change the personality of the Mets, and therefore change my view of the team as well. His addition would not excite me in the least — in fact, it would be akin to the day Steve Phillips acquired Roberto Alomar, which was an uneasy feeling of nausea. In fact, I’d likely reconsider my allegiance to the orange and blue.

Back Posada Top Target?
Next Dunn Off the Market