Mets let a sweep slip through their fingers.

Jonathon Niese allowed only two runs in 5 2/3 innings, but it wasn’t without a struggle — and a bit of luck. Niese gave up 10 hits and 2 walks, constantly struggling and pitching out of the stretch, yet managed to make exactly the right pitches at exactly the right times, and/or getting the Nats to retire themselves. It’s not easy to limit a team to a pair of runs while allowing more than two baserunners per inning.

It looked to me like Niese was out of balance during the leg lift, which was more like a leg kick and caused his head and back to tilt back toward third base. Simultaneously, he collapsed his back (left) leg, which takes away from velocity. Ironically, pitchers think they’re able to add velocity with this tactic, because they feel themselves “pushing off” the rubber — it’s the old-school “drop and drive” motion that Tom Seaver made famous. I’ve seen Niese do this at times previously in his career, and it’s not terribly efficient nor effective, because the moment he drops down, he loses height (in turn, leverage) and momentum. (The “drive” or “push” off the rubber happens once the front foot touches the ground, not before.) I’m wondering if he is consciously doing this as a reactive adjustment to his shoulder injury?

Nationals starter Ross Ohlendorf is a perfect example of a pitcher whose motion one would not want to emulate. He throws all arm, with a completely upright delivery, and puts all of the stress of deceleration on his shoulder. Not surprisingly, most of his fastballs were left up in the zone — chest-high, arrow-straight bullets that the Mets hitters easily timed and ripped for multiple extra-base hits. Also, the way he swings his hands to start his motion is great for building momentum, but leaving the ball in the glove until he starts his forward motion is not exactly the smartest thing to do — it requires perfect timing and adds effort to keep the ball from falling out of the glove. I understand he doesn’t want to give away his grip, but there has to be a better way. It’s fascinating and ironic that both Ohlendorf and former Met pitcher Chris Young are Princeton graduates, therefore one assumes they’re pretty smart, yet both have such harmful mechanics that could’ve been corrected at some point had the pitchers done any research into biomechanical principles / kinesiology.

Speaking of smart people, I was absolutely thrilled listening to Orel Hershiser discuss the topic of pitching injuries, explaining that “we just don’t know” about proper mechanics nor why pitchers get injuries, and that we can’t predict injuries — they just happen, and they’re going to happen. Of course, the “we” to which he was referring was “people who don’t accept science” — i.e., anyone associated with Organized Baseball. These are the same people who probably use leeches and blood-letting to cure disease, and assume that Christopher Columbus sailed off the edge of the Earth.

I’m being obnoxiously snarky, but it’s really upsetting to me that a truly intelligent guy like Hershiser accepts the same line of garbage perpetuated by everyone in pro ball. Step outside that tiny world for just five minutes, please, and maybe you can learn a little, go back and tell the ignorant about modern science, and get started toward logical methods of keeping pitchers safe!

Nice adjustment by Jayson Werth in the second inning. During pitch #9 of the at-bat, Werth dropped his shoulder slightly, opened up a bit early, and took a long arm swing at the ball, fouling off a pitch he should’ve crushed. He stepped out of the box and took three practice swings, over-exaggerating the “wood-chop” motion to remind himself to swing down to the ball. He did exactly that on the very next pitch, putting good backspin on the ball and driving it down the left-field line for a double.

A set of terrible at-bats by Werth and Ian Desmond in the fifth got Niese out of what could’ve been sticky situation. None out, men on first and second, and Werth swings at the first pitch — a curveball, which surprised him, and he popped it up in short center field for the first out. Desmond followed by striking out on a fastball above his eyes. Was that good pitching by Niese? That’s up for debate. The curveball was hung — like most of the curves he threw during the evening — and could’ve been crushed. On the other hand, it was a good pitch in that Werth was clearly expecting something else. As for the fastball at Desmond’s eyes, that’s more about bad judgment by Desmond than a great pitch by Niese. It worked, so ends justify the means, but a better pitch is above the batter’s hands, just at or slightly above shoulder level — where it looks good enough to swing at but too high to do anything with.

I’ve noticed that Eric Young‘s feet come off the bag frequently when sliding into a bag on a stolen base. The Nationals are the first club I’ve seen that have infielders who have the habit of leaving the glove on Young’s person as he pops off — but an umpire has yet to call him out for it. Too many infielders put a tag on a runner and then take the glove away, showing the umpire the ball. I’ve never quite understood this, because runners stopped trying to kick the ball out of the glove about 50 years ago. Put the tag on the runner and stick it on him until he stops moving, just in case he over-slides the bag.

Great hustle by Denard Span in the 8th, going all the way from second base to score on a grounder to short. He got a good jump on contact and never once hesitated. Though, the play of the game might’ve been the sacrifice bunt by Bryce Harper to put runners on second and third. It surprised me — I thought for sure he’d be swinging away in that situation. But against the LOOGY Scott Rice, it made some sense and it worked out.

For a moment, I thought the Nats’ clubhouse man forgot to iron flat the bill of Tyler Clippard‘s cap. Then I realized it was Erik Davis on the mound (not to be confused with Eric Davis).

Mets move on to Atlanta to start a series with the Braves at 1:10 PM on Monday afternoon. Daisuke Matsuzaka labors against Paul Maholm.

So, I need to generate more revenues to pay the server fees to keep this blog going. That said, I’m going to start suggesting interesting Mets-related items that you can buy from Amazon. If you buy them through the link on MetsToday, somewhere between 4% and 6% of the purchase price will go toward the server fees. If by chance I collect more fees than I need, I’ll donate the difference to a reputable charity to be determined. 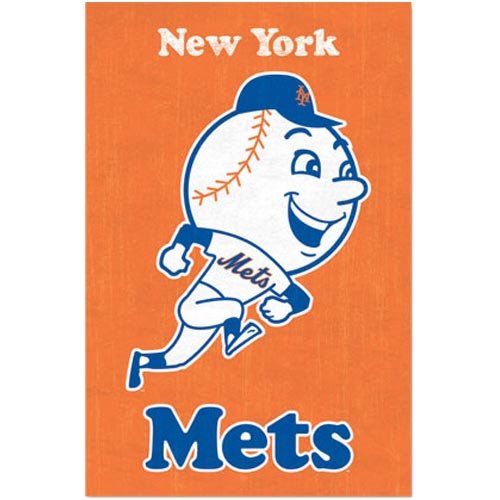