There was a game yesterday?

Daisuke Matsuzaka started on the mound for the Mets on Monday afternoon. That was all I needed to know to keep from turning on the television. Instead of watching Dice-K labor through hour-long half-innings (fittingly, on Labor Day), I chose to spend my time more wisely, efficiently, and effectively, doing anything but watch the ballgame.

Looking at the boxscore, it’s apparent that I made the right choice. Kudos to the Mets youngsters for hanging in there and continuing to fight, as evidenced by the pair of runs they put on the board in the seventh.

Remarkably, it was announced that Matsuzaka will pitch again. Perhaps it’s not so remarkable, though, considering that the Mets don’t have anyone else to send to the mound every fifth day. As much as I liked sending Collin McHugh to Colorado for Eric Young, Jr., I suddenly understand McHugh’s value. Or, my perception of McHugh is warped by the Mets’ startling lack of starting pitching depth.

How did the Mets find themselves in this situation? We saw it coming back in March, didn’t we? And as far back as January, when the only starting pitcher added to the roster was extreme injury risk Shaun Marcum.

But, I suppose it doesn’t matter that the Mets are running short of starting pitchers, because the season is pretty much over and the Mets are on the verge of being mathematically eliminated from the postseason. It feels kind of like the beginning of June at the end of a school year, when teachers have completed teaching their courses, and kids are just showing up for the purpose of attendance for the last few weeks.

Wait … what happened to Sandy Alderson’s assertion that this last month of September WOULD BE meaningful, because the Mets were focused on finishing strong and building momentum toward 2014? I’m not feeling it, especially after the trade of Marlon Byrd, the injury to Matt Harvey, and the impending shutdown of Zack Wheeler. Oh my, who’s going to pitch when Wheeler is shut down? Will it be Aaron Harang?

Most likely I’ll watch tonight’s game, as there’s a decent chance it will be more interesting and quicker than watching paint dry.

The Mets and Braves do it again at 7:10 PM. Carlos Torres starts against Kris Medlen.

Hopefully the image and link will work this time; still trying to figure out why the very cool, very cheap New York Mets Retro Logo Sports Poster Print that didn’t show up in yesterday’s post for reasons unknown.

Today’s choice is a perfect “back to school” item for the kiddies: an insulated lunch bag with the New York Mets logo! 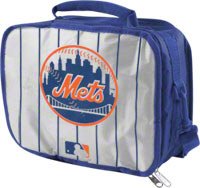