For the first time in a dozen years, a pitcher threw six shutout innings and struck out twelve. Unfortunately, it wasn’t Zack Wheeler.

Former Met phenom farmhand Scott Kazmir whiffed a dozen in a half-dozen innings. He was humming in the 93-95 MPH range, which is pretty impressive considering the injuries he’s had throughout his career.

Wheeler wasn’t quite as impressive, struggling in nearly every frame. He had no command of his fastball, which he was throwing mostly in the 91-93 range. What happened to the upper-90s fastball? Is he tiring due to it being his longest season ever? I’m not so sure. He was over-exaggerating keeping his front shoulder closed, to the point where it was preventing him from reaching full velocity. A pitcher needs to keep his front side closed as long as possible AFTER his front foot hits the ground. What Wheeler was doing was turning in his front shoulder at leg lift (over-rotating) and keeping it there to the point where it looked unnatural. The result was that his right arm was far behind the rest of his body — even moreso than usual — and his pitches were higher than intended. I also was concerned with Wheeler’s body language. He looked uncomfortable and frustrated from the get-go, which to me suggests he was either thinking too much about his mechanics, or, experiencing discomfort or pain.

While Mets pitching couldn’t keep up with Kazmir’s Ks, the hurlers in orange and blue were able to walk 8 batters.

It didn’t make a difference in the ballgame, but a little thing I noticed that could have been the difference. In the first frame, with Michael Bourn on first base, none out, and the Mets playing an extreme shift to the right side with Nick Swisher at the plate, Swisher hit a grounder through the shift (somehow … I suppose it had something to do with the combination of Daniel Murphy and Wilmer Flores), and Bourn rounded second but was looking behind him at the right fielder gathering the ball so he didn’t see that no one was covering third base — Justin Turner was doubling back there from his shifted position near second base. There’s no way Turner would have backpedaled to third in time to beat Bourn to the bag. I’m not sure why Bourn was looking behind him — he should have taken one quick look to see where the ball was, then had his eyes on the third-base coach for further direction. I did see Wheeler take off from the mound to cover 3B, but had Bourn not hesitated, I think he would’ve beaten Wheeler to the bag. Remember, too, that Wheeler not only would have had to beat Bourn to the bag, but also catch the throw from Andrew Brown and apply the tag. That takes time and precision — and I doubt Wheeler has much experience catching outfielders’ throws and making tags on runners.

Speaking of Justin Turner, he hit an absolute bomb well over the center-field fence for the Mets’ lone run. He had to be guessing fastball, he got it, and he crushed it.

In the DH role and batting third, Josh Satin whiffed three times, whining to home plate umpire Gary Darling after striking out looking in his final at-bat. I really like Satin, root for him, and want to see him succeed, but like Ike Davis, he’s only hurting himself by making enemies with umps so early in his career — and it just plain looks bad. Maybe it’s a PAC-10 thing.

Am I being a conspiracy theorist or did it seem like there was a lot of artificially placed love for Terry Collins in the talking points of this broadcast? I caught a bit of it during the Tim Teufel interview and then after Gary Cohen caught Asdrubal Carrera loafing to first on a grounder, Cohen remarked, “Under Terry Collins we haven’t seen a single Met do that this year.”

I’m guessing that Andy Martino grew a beard to make himself look older than 13 years old, but now he reminds me of Michael J. Fox in Teen Wolf

The Mets and Indians do it again at 6:05 PM on Saturday night. Jonathon Niese takes the ball against Corey Kluber.

If you live in the NYC area, then you know the temperature has changed quite quickly — it’s feeling like fall already. How much, exactly, though, has the temperature dropped? One way to know is by buying a New York Mets Thermometer

from Amazon for only about sixteen bucks. Click that link to buy it, or the image below. 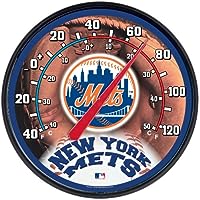