Mets lose again in Cleveland, dropping to 14 games below .500. No worries, though, as Dice-K takes the mound on Sunday.

It took Jonathon Niese 39 pitches to get through the first frame — not good for someone with a rotator cuff issue. It could be argued that the length of the inning was due in part to a blown call by the first base umpire, but the bottom line is that the Indians pounded Niese from the get-go.

Niese’s main problem was that he was living on only the outside half of the plate, continually picking at the outside corner against righthanded hitters, often missing, falling behind in the count, and then having to come in with a strike and getting too much plate. Further, most of the Cleveland hitters seemed to be looking for outside pitches (and/or curveballs), sitting back, letting the ball get deep, and driving the ball to the opposite field. Had their strategy been to pull, Niese likely would’ve gotten a few weak grounders to shortstop to end the inning earlier. But his approach meshed exactly with that of the Injuns. Why he wasn’t mixing in more fastballs or cutters inside to the RH hitters is a mystery.

I was surprised to see Niese go out to start the sixth after throwing 92 pitches through five, and after a long top half of Mets offense, and particularly considering that stressful first frame.

As for the blown call at first, at least some of the blame has to go to Lucas Duda for the baffling footwork he used in receiving the throw from Justin Turner. Not sure why he was backing up into the basepath instead of striding toward the throw. I get that he hasn’t played much first base this year, but it wasn’t a complicated play.

Speaking of errors and terrible footwork, yet another questionable “hit” call on a sharp grounder to Daniel Murphy in that first frame. It was definitely a tough play, but was it so tough that a Major League second baseman couldn’t make it? I’m not so sure. Murphy’s hands were all tied up on the play because he didn’t get his feet into proper position — he was caught between getting in front of the ball and trying to backhand it.

Murphy also made a bad feed to Omar Quintanilla in the seventh on what should’ve been an easy double play. For those in the audience who think I’m hard on Murph, sorry, but I feel the need to point out many of Murphy’s blunders as a means of balancing out the noise around the blogosphere suggesting that Murphy is an adequate defensive second baseman. MetsToday – fair and balanced.

In the top of the fifth, Matt Den Dekker led off with a line drive to right field that was gloved, then dropped, by Drew Stubbs. Scored a base hit, of course. Should a MLB right fielder make that catch? Hmm …

Travis d’Arnaud continues to struggle at the plate, but as I’ve mentioned earlier, I’m not concerned about his future as a hitter. In fact, if he goes oh-for the rest of September, I won’t be concerned. There was some discussion by Keith Hernandez and Gary Cohen about his long swing, but too me it’s not that big a deal — I don’t believe he’s expected to hit .300, and that swing should allow him to swat 15 or so HRs a year, which is plenty for a catcher who provides at least average defense — which, so far, seems to be the case. His main flaw is that he tips the bat head toward the pitcher when he starts his swing, which makes him late on pitches. That hitch, or bat-wrapping, or whatever you want to call it, reminds me a little bit of a similar movement Dale Murphy used to employ to get his bat started — Murphy’s wasn’t quite as pronounced, and he did it earlier in the process, but it is an example of someone flourishing despite such a flaw. Otherwise, it looks to me like d’Arnaud is tense in the batter’s box, and thinking too much. A winter off to clear his mind and then entering 2014 as the Mets starting catcher should be all d’Arnaud needs to get back in the groove.

Asdrubal Cabrera hit a laser into the right field seats off of Scott Atchison in the seventh to put the Tribe up 9-4. How did he do it? Atchison threw two inside sliders immediately prior to tossing the inside fastball that Cabrera crushed. Throwing to the same spot three pitches in a row, without a significant change of speed, is a recipe for disaster.

Anyone else find annoying the Super Mario Bros. sound effect every time the Indians score?

The final game of the series in Cleveland begins at 1:05 PM. Daisuke Matsuzaka takes the ball, holds it, mulls over it, and thinks about it, against Danny Salazar. I’m definitely going to DVR this one and watch it later — there’s no way I’m suffering through the painful, masochistic ordeal of waiting for Dice-K to throw a pitch. Thank goodness for DVR, the remote control, and fast-forward.

Start your day with your favorite Flushing team and mascot by waking to this New York Mets, Mr. Met Alarm Clock

. It’s travel size so you can bring it on the road, it’s under sixteen bucks, and best of all, it has a 5-minute snooze button — so you can take naps between Daisuke Matsuzaka’s pitches, and wake up just in time to see his next offering! 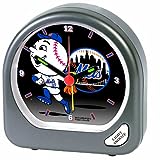 Back Mets Game 139: Loss To Indians
Next Mets Game 141: Win Over Indians