As a kid growing up, one of my favorite shows to watch on TV were the reruns of Home Run Derby. That said, I was thrilled to see the series rekindled in Flushing on Monday night.

Someone forgot to inform Carlos Torres that batting practice was over and the first inning had officially begun. As a result, Torres threw a couple of BP pitches to Denard Span and Ryan Zimmerman, who obliged the gesture by depositing those pitches over the fence to give the Nats a quick 2-0 lead. That pair of dingers was the first of five the Nats would hit before the final out of the contest.

Not that the homerun barrage mattered much — the Mets didn’t record a hit off Gio Gonzalez until pinch-hitter Zach Lutz placed a ball on the first-base chalk to lead off the seventh. Gonzalez went the distance, recording a one-hit shutout with a highly efficient 110 pitches — 79 for strikes.

Lutz, in fact, reached base in both of his plate appearances, following up his no-hitter-breaking single with a walk in the ninth. The only other baserunner was Daniel Murphy, who also walked.

It was a beautiful night in Queens — clear sky, gentle breeze, temperature in the high 60s. Could it have been more comfortable and ideal to take in an evening game at the ballpark? Yet, the Field at Shea Bridge had many, many empty seats. Apparently, not many Nationals fans in New York this week — or maybe, everyone who considered going to a baseball game chose tennis instead.

The Mets and Nationals do it again on Tuesday night at 7:10 PM. Dillon Gee takes the ball against Jordan Zimmerman.

Old-schoolers like me refer to the home run as a “tater.” Considering that, and the fact the Mets gave up more homeruns in this game than any other in 2013, I find it fitting to offer the New York Mets Mr. Potato Head

. And it’s on sale for only $10.40. Click the previous link or the image below to buy it now from Amazon. 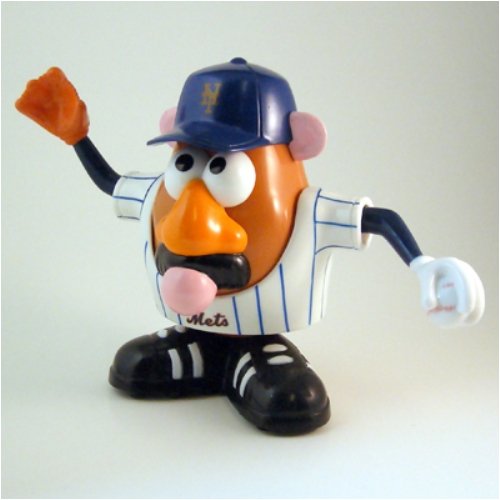