Mets win battle of bullpens to avoid a sweep in Cleveland.

Daisuke Matsuzaka had his curveball working early, but not much else. But that was OK, because he was able to work the curve consistently and keep the Cleveland hitters thinking about it through five and two-thirds strong innings of one-run ball. If Dice-K can pitch like this every time out, the Mets might have something.

Danny Salazar looked electric — until he had to pitch from the stretch, which might explain why the flamethrower is not being projected as a short reliever. The kid throws hard and likes to stay up in the zone, which generated lots of breezy swings from the Mets hitters. It was hard to lay off his high heat because he usually kept it just at the top of the strike zone — until he had two strikes, when he’d locate it just a few inches higher.

Justin Turner blasted another moon shot, looking for and timing that high fastball. I’ve said this in the past and will say it again — he’s been the Mets’ best overall everyday second base option over the past 3 years. I don’t know he’d start there for anyone else, he’d never win a Gold Glove, and he’d never win a batting title, but he’s average in every aspect of the game — similar to Joe McEwing in McEwing’s better years. The muppet also was whacked in the jaw on a failed steal attempt and struck out in a very heated at-bat against Joe Smith in the 8th with the bases loaded. Smith threw three perfect pitches to whiff Turner, but it took a total of eight or so offerings before the feisty redhead was retired.

Did anyone expect Frank Francisco to get the Mets out of that 8th inning jam? Was anyone like me, fully expecting the Indians to score 3 or 4 runs within minutes of his appearance on the mound?

Refreshing to hear Keith Hernandez‘s opinion on today’s post-PEDs hitters, and his overall belief that the level of MLB play is down due to watered-down talent / rushing kids to the big leagues before they’re ready. Sure, he’s as much of an old-school curmudgeon as me, but it’s nice to know I’m not the only one.

In terms of hitting mechanics, Keith is spot-on. Over the past 20 years or so, hitters became more reliant on upper-body strength — the result of both spending too much time in the weight room but also the technological advance of non-wood bats at amateur levels. It’s much easier to swing mostly with the upper body because there’s less to think about, and that ease is compounded by bulky arms and feather-light bats. That style of hitting is easier, but not necessarily more effective — especially when a hitter moves to the wooden bat and better pitching. The adjustment for many players prior to PEDs testing was to bulk up even more — it’s easier to get stronger than to change one’s hitting mechanics. Today, though, MLB hitters need to use and properly coordinate their entire body to generate the bat speed necessary for hitting big-league pitching. In other words, they need to know how to incorporate their lower half.

I just figured out why the Mets signed — and continue to send out to the mound — Daisuke Matsuzaka. Because SNY can sell :30 and :45 ad spots in between each of his pitches. Brilliant.

The Mets return to Flushing for four games with the Nationals beginning Monday night at 7:10 PM. Carlos Torres takes the ball against Gio Gonzalez.

. These baggies have the Mets logo and close at the top with a ziplock, just like the ones you get at the grocery store — and they’re only $4.75 (with free shipping!) for a box. 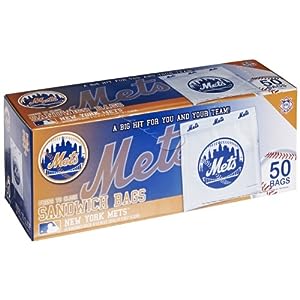