If there was one game in this series that appeared to be a “gimme” for the Mets, it was this one. Oh well.

Zack Wheeler was very good, perhaps excellent. Unfortunately, he needed to be perfect.

Wheeler got out of a very tough situation in the first frame with two strikeouts, and continued to battle through his seven-inning stint. Other than one-two-three innings in the second and third, Wheeler pitched with stress and from the stretch as the Nats put runners on base in what was a scoreless ballgame until the sixth. But at some point, your team has to give you a run or two, and that never happened as the Mets were shut out for the second time in three days.

Why they could manage only three hits against Dan Haren was a bit of a mystery. It wasn’t as though Haren was slinging nasty stuff — the Mets merely made outs.

Ruben Tejada started at shortstop, making his first appearance since going on the disabled list in late May — and later, demoted to AAA. I’m curious: what did Tejada do to deserve a September promotion? Is he back in the bigs only because he’s already on the 40-man roster? Is it because the Mets didn’t have any other shortstop to promote, and Omar Quintanilla needs a breather that desperately? Or, did Tejada truly earn the promotion based on a change in attitude over the last few months in Las Vegas? I hope it is that final suggestion, because if it isn’t, then the Mets are (still) sending the wrong message to their young shortstop. Based on the recent comment by Sandy Alderson regarding “pulling teeth” when it comes to Tejada, I would think that allowing his season to end concurrent with the 51s would be the best way to motivate him for 2014. Like other youngsters over the past few years, Tejada has been rewarded for negative effort; not a great way to develop young bucks into polished MLBers.

Jayson Werth hit a double in the first frame — or did he? Eric Young, Jr. grossly misjudged the ball off of Werth’s bat, and it went flying over his head and to the wall. Not an error, of course, because Young didn’t get his glove on the ball. Eh, whatever.

The blah-blah about Pedro Lopez was eerily similar to the hype foisted upon Manny Acta way back when. Wally Backman‘s omission from the dugout is telling; expect him to be leaving the organization sooner rather than later. Ron Darling pointed out Backman’s discussion with Mike Francesa as being the beginning of the end for Wally. I’ve listened to that interview several times and didn’t hear the same thing everyone else did — I heard someone who was asked to take care of something, and expressed confidence he’d succeed. In this day and age of GMs micro-managing ballclubs, and preferring brainless yes-men who simply carry out orders, there is no room for a manager who has an opinion, has a brain, and knows how to win. Because it’s not his job to win, it’s his job to nod his head, play the percentages given him on the stat sheet, and agree with whatever the geniuses in the front office have to say. Fine. Baseball’s all about numbers anyway, right?

The Nationals go for the four-game sweep on Thursday afternoon at 1:10 PM. Aaron Harang makes his Mets debut against Tanner Roark, who is undefeated but making only his second start of the season.

Since WFAN has dropped Mets telecasts for 2014, I thought it was fitting to suggest a New York Mets Portable iDock Stereo Speaker

. You may as well ditch the AM radio and pony up for MLB radio next year — who needs the extra device, anyway? Just pay for MLB radio, get the app for your iPhone, and dock it when the Mets play. 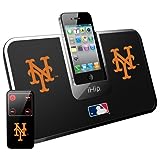