So this is what it looks like when a “Major League” team throws in the towel.

What a disgrace. The only consolation for this shameful event was that very few people wasted four hours of their life by attending. Though, it is rather upsetting that 20,484 people flushed their money down the toilet.

Hey, I get that the Mets have been mathematically eliminated and thus September has become a month-long audition for the organization’s youngsters. But when over 20,000 people have handed you their hard-earned money for a MAJOR LEAGUE BASEBALL game, you have the responsibility of delivering MAJOR LEAGUE caliber baseball. What is happening this September is an atrocity, and is all the more unacceptable considering it’s happening in New York City. The conspiracy theorist in me is thinking back to 1984, when the Houston Rockets won only 14 games and, thanks to a coin flip, the first pick in the NBA draft. If you’re old enough to remember that scandal, you may understand why I’m cynical; there’s too much motivation for the Mets to finish with one of the ten worst records in baseball.

Anyway, back to the “game,” which seemed more like a spring training exhibition between a big-league club and a college team.

The shame of this is that the Mets wasted a rare strong outing by Aaron Harang. At this point in his career, Harang is not unlike Dan Haren, in that he was once dominant, now is terrible, but every once in a while puts together a surprisingly effective start. This game was Harang’s one — don’t expect to see him pitch this well again in 2013. He might, but, chances are, he won’t.

So, the Nationals hit 13 homeruns in the four games, while the Mets hit none. In fact, the Mets collected a measly 21 hits in the series.

Nice to see Frank Francisco back to his old self. For a moment there, I thought he had some modicum of value. Nonetheless, some crackhead GM will give him a one-year deal for $1.5M this winter. Crazy, right, when you think about how much YOU make at your job, and how hard you work at it, and how effective you are in your position?

Francisco clearly and blatantly plunked Jayson Werth with a pitch on a 3-0 count. Nice reaction by Werth, who, if you read his lips, seemed to say, “f— you, b—tard, that’s f—ed up” — because, it was. As Ron Darling said, Frank-Frank did that “because he’s a fool.” Hey, I’m an old-schooler who has a different opinion of “purpose pitches” than most of the mamby-pambys proliferating the game today, but I’m with Ron on that one — it was foolish, and unnecessary, and put all of Francisco’s teammates in danger. The time to go inside (but not necessarily hit someone) was two games ago, when it was clear that the Nats were very comfortable in the box and swinging from their heels. At that point, and by that numnut, it was just plain stupid and unpurposeful (is that a word? I don’t care, I’m making it up). Stupid, selfish act by someone who has a long history of stupid, selfish acts throughout his littered, mediocre career. Nice, though, that several MLB teams made him a millionaire and he’ll be able to live a comfortable life. Oh, do I sound bitter? I am. Frank Francisco is a disgusting excuse of a professional ballplayer.

Did I mention the Nats hit 13 homeruns in this series? At Citi Cavern, no less? I did. Just want to make that crystal clear.

It was costume day at Citi Field, as at least 37,000 fans were admitted free for dressing up as empty seats. I suppose it was the threat of rain that scared people away from Flushing. Either that or the threat of Frank Francisco coming in from the bullpen.

The Mets host the Miami Marlins on Friday night at 7:10 PM. Jonathon Niese goes to the hill against Brad Hand. No, Brad is not the son nor grandson of Arnold, as far as I can ascertain.

Since the Mets are throwing in the towel on 2013, it’s fitting to recommend you purchase this lovely pair of kitchen towels

for only sixteen bucks. You can’t beat that with a stick (nor a wooden spoon)! The set includes one 16″x25″ hand towel and one 11″x18″ fingertip towel, both emblazoned with the New York Mets logo. 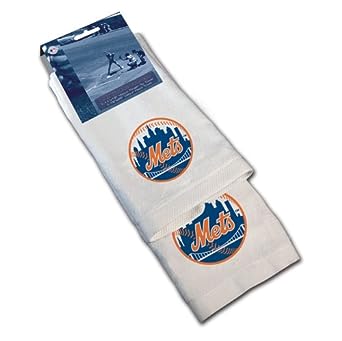