Mets move themselves one more win away from a protected pick in next June’s draft.

Despite his last two stellar starts, I kept waiting for Daisuke Matsuzaka to implode — and he never did. Well, I guess you could kind of say he imploded in the fourth, but the Phillies were helped by defensive miscues, including a questionable call on a horrendously executed rundown. And though a Mets fan might say the Phillies were “lucky” that inning, by the same token, the Mets were damn lucky to have so many fisted duck snorts and Texas Leaguers drop in at just the right times to score the majority of their runs — it goes both ways.

Cole Hamels always has that almost Cliff Lee-like coolness about him, but in this game it came across as not giving a hoot — like he was just out there because he had to be, playing out the string. But, that could be more due to my personal feeling about these last two weeks of the season projected upon him.

Juan Lagares made a beautiful running catch on a liner in the bottom of the ninth to rob Darin Ruf of an extra-base hit and keep Latroy Hawkins out of trouble. As good as Matt den Dekker has looked in center, it doesn’t make much sense to put Lagares anywhere else — especially considering his questionable bat. He’ll save plenty of runs in center, but won’t save enough in one of the corners to justify what will likely be a .250 hitter with minimal power and slightly above-average speed.

Omar Quintanilla royally screwed up the rundown in the fourth — regardless of whether he actually tagged Ruf. It was poor execution. No error on that though, another remarkable quirk of official scoring. It was merely a fielder’s choice without an out being recorded — apparently, MLBers aren’t expected to execute a simple rundown. Go figure.

The one error of the ballgame was charged to Eric Young, Jr., whose short-hop throw couldn’t be handled by Daniel Murphy at second base, allowing Domonic Brown to score. I guess the error has to go to Young there because the throw wasn’t perfect, but gee whiz shouldn’t a MLB second baseman handle that, or knock it down? Maybe not.

But, I’m too hard on Murph. After all, he did have three hits and score three runs — so he made up for any defensive shortcomings. And, he stole his 20th base, meaning he can be mentioned in the same sentence with Lawrence McCutchen, Carlos Gonzalez, and some other guys for some random stat combination or another. Perhaps even more valuable to the Mets, Murphy has really turned it on since the meaningless month of September started. After spending the bulk of the year as a .270 hitter with a .300 OBP, he’s suddenly at .284 with an OBP that’s threatening to reach .320. If he can stay this hot through the last 9 games of the season, his end-of-year numbers may look respectable enough to make him legitimate trade bait over the winter.

So far, I’m liking what I’m seeing of Travis d’Arnaud behind the plate, and still believe he’ll hit enough eventually. However, the Mets better give him some media training over the winter, because he looks like a frightened deer in the headlights during the postgame interviews. No big deal right now, because he’s a kid, but next year, he may be expected to be one of the go-to guys. Or, maybe he can take the Carlos Delgado route and go hide in the trainer’s room every night. Personally, I’d like him to get more comfortable in front of the camera, because he seems to be a very likable and intelligent guy who has the potential to provide plenty of worthwhile comments.

The Mets and Phillies do it again at 7:05 PM on Saturday night in Philadelphia. Dillon Gee goes against Tyler Cloyd.

Another cool-weather item: a hoodie. No, a duffel. Wait, is it a hoodie or a duffel bag? It’s both! Now, if it’s one of these questionable autumn days when you’re not sure if it will be in the fifties or the seventies, you can use this as a duffel while it’s warm, and wear it as a hoodie if it gets cold. Click this link or the image below to buy from Amazon: New York Mets Hoodie Duffel 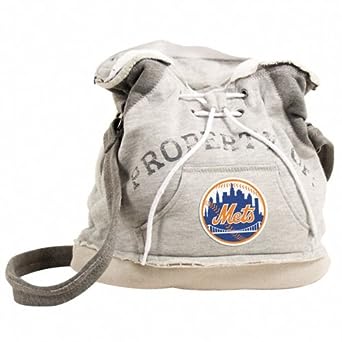