Just think, if the season wasn’t expanded from 154 to 162 games, the Mets would be done for the year today, finishing on a high note, and owning a protected pick in next year’s amateur draft.

Oh, and that makes two wins in a row for the amazins’ … you know what they call three?

Do you think the Mets were lucky that rain stopped the game? Precipitation came at just the time the Phillies started to get themselves into gear, sparked by the notorious “third time through the lineup” against Dillon Gee. Would the Mets bullpen been able to hold the fort through the final three frames? Even if they couldn’t, I’m not so sure the Phillies would’ve been able to shut down this suddenly powerful Mets offense. Had it not been for the rain, it could’ve been an exciting barn-burner for the final few frames.

Oh, and that 70th victory raises them to tenth-worst in all of MLB. If they beat the Phillies again on Sunday, the two teams will be tied for tenth-worst with identical 71-84 records — though, the Toronto Blue Jays are also threatening to bust in to the bottom ten with their 71-83 record.

Considering the standings, and what’s at stake, is there just a little piece of you wondering if a team, or teams, might be motivated to do one thing or another to give themselves less of a chance to win the last eight games of the year? You know, like, rest a star player, start a rookie on the mound, or “test” a youngster in a tough situation late in the game? Hmmmm ….

Cesar Hernandez is clearly not a center fielder. Though I’m sure the Phillies keep sticking him there because they have no one else — not because they want to lose. Similarly, Tyler Cloyd, Joe Savery, and Ethan Martin are getting the ball because a) the Phillies are short on arms; and b) they need to see what they have with these guys.

The final game of the series begins at 1:35 PM on Sunday afternoon. Carlos Torres takes the hill against Cliff Lee.

There is still about a month or so of tee times here in the northeast, so how about getting a New York Mets Divot Tool and Ball Markers 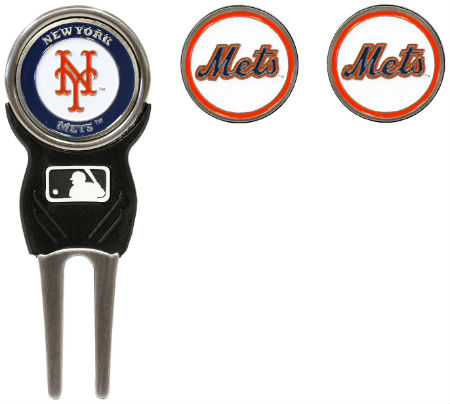