Jeff Wilpon Throws Down the Gauntlet

Perhaps lost in all the excitement and ballyhoo of Terry Collins and Dan Warthen receiving two-year contract extensions were the quotes of Jeff Wilpon. Particularly this one:

I think Jeffy was saying that the organization feels the pressure to win, but are choosing to accept it as an opportunity. I also believe this perspective comes from a self-help book — which is cool, as I have read a number of those in my time.

Whatever, it sounds like Jeffy realizes that everyone is expecting some kind of forward movement, after five straight losing seasons, and more specifically, a won-loss record that has gotten worse, worse, and worse again in the three years of “not rebuilding” under Sandy Alderson.

This proclamation is eerily reminiscent of one made in 2009 — when Omar Minaya’s tush was similarly simmering. Yes, I do believe it sounds like Sandy Alderson is on the hot seat. Shouldn’t he be, after three years of seeing a team perform progressively worse? (Hmm … can anything be “progressively worse?”)

During Monday’s presser, much was made about the suddenly dissolved financial constraints, mainly due to the contract of Johan Santana and Jason Bay coming off the books. Alderson made clear that the Mets were in position to make a $100M offer to a player, if it was the “right” player. (We’re not privy to the advanced algorithm denoting what players might be “right,” but we’ll trust that Alderson and co. have that figured out.) Though, from the other side of his mouth, Alderson also said this:

“We’d be in a position to do it, whether it were the right player. But would it be prudent to do it, even for the right player? It’s not out of the question. Will we do it, that is more of a strategic question, not a matter of resources.”

I swear to God that this sounded a lot better to my ears than it looks in type. I swear.

Regardless, even through the doublespeak, it sounds like the Mets have the financial resources to obtain expensive players, and the Mets are expecting a winning season in 2014. Go back to that link a few paragraphs ago and click on it, if you didn’t already. Ironically, that was the same winter the Mets signed the aforementioned Bay.

See what I did there?

Looking back to the past to predict the future, here’s what I’m seeing in my orange and blue crystal ball: the Mets overpay for a free-agent this winter to make it appear as though they’re serious about winning next season. Or, roughly translated, they’re going to sign someone like Shin-Soo Choo or trade for a high-priced talent like Troy Tulowitzki for the express purpose of selling season tickets.

Am I nuts? Or do you believe history tends to repeat itself? And/or that someone other than the GM has been in charge of the Mets ever since Nelson Doubleday was pushed out.

Fire away in the comments.

How about a New York Mets Mr. Potato Head

? I swear it was a completely random choice, and in no way associated with the editorial content. Really. 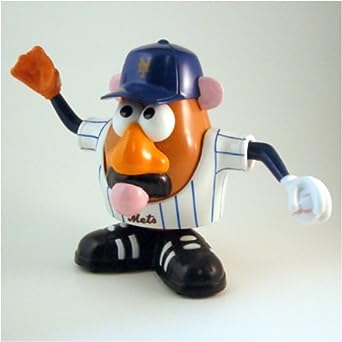 Back Two More Years of Terry Collins
Next First Rumor of the Winter: Brandon Phillips