No, it’s not another flashback post. Shaun Marcum has been signed, and Collin McHugh, released.

But not by the Mets.

The Cleveland Indians signed Shaun Marcum to a minor-league contract with an invite to spring training, as well as an opt-out if he doesn’t make the big club. If he does go north in April, he gets $1M guaranteed and another $3M possible in incentives. He’ll compete for a spot at the back end of Cleveland’s rotation.

In a completely unrelated move, the Colorado Rockies have designated Collin McHugh for assignment. The former Met has put up good numbers in the minors, but failed miserably in the big leagues. I’ve always thought of him as a poor man’s Jeremy Hefner, for whatever that’s worth. Perhaps the Mets will consider bringing him back for AAA depth.

In yesterday’s post, I somehow missed the Braves’ signing of Gavin Floyd on a one-year, $4M deal, with another $4.5M possible in incentives. Supposedly, Floyd turned down a 2-year, $20M deal (that figure includes incentives) with the Orioles, who sought to pay for the rest of his rehab and then reap the benefits for another year. Nice roll of the dice by big-market Atlanta, who will expect Floyd to return by May or June from Tommy John surgery. Prior to the elbow injury, Floyd was a solid if unspectacular innings-eater for the White Sox; he should be a very good #5 or #4 starter in the NL. As if the Braves need more pitching …

Speaking of the White Sox and pitching, the ChiSox dealt reliever Addison Reed to the Diamondbacks in return for third-base prospect Matt Davidson. A fascinating trade — Reed is only 24 and has saved 69 games in the past two years, while the 22-year-old Davidson is a former first-rounder who appears to be the real deal, but has yet to prove himself in MLB.

Finally, the Orioles signed Chris Marrero, which ticks me off because I was about to write a post arguing that the Mets should consider signing the former Nationals hot prospect. Maybe my eyes aren’t as good as I’d like them to be, but I really like the way Marrero swings the bat and his plate discipline (not to be confused with OBP; he seems to wait for his pitch, and swing at it when it comes). Marrero may never live up to the stardom once predicted, but I think he could turn out to be an above-average player if given the opportunity — which, to me, made him a good fit for the Mets. He could have, for example, been a RH option off the bench, platooned with Lucas Duda at 1B and filled in at LF here and there. Essentially, be another Josh Satin — the difference being that Marrero is 25, and may still have upside, while the 29-year-old Satin pretty much is what he is.

How about a Mets Christmas Stocking 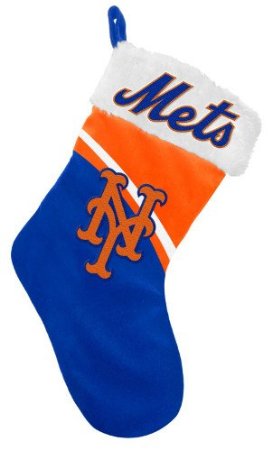