For most of the ballgame, it was a 1-1 tie, then the floodgates opened in the 8th inning when the Mets put a seven-spot on the scoreboard.

Final score was Mets 8 Braves 2 as the Amazins’ upped their spring record to 4-5, and dropped the Braves to an Uggly 2-9. Though, the games don’t count until April, so take it with a grain of salt.

Some things I saw …

Juan Lagares threw a laser beam in the first inning to throw out Andrelton Simmons trying to go from first to third on a single — the ball arrived in David Wright‘s glove, on a line, when Simmons was about 30 feet from the bag. Bad decision by Simmons, great execution by Lagares.

Another great throw from the outfield was made by Andrew Brown in the 8th to cut down Matt Lipka at the plate. Just one thing, though — Mets catcher Kevin Plawecki was clearly blocking the plate while waiting for the ball. Isn’t that now supposed to be called as obstruction by the umpire? Here are four photos taken from the TV screen, all of which clearly show Plawecki doing exactly what catchers aren’t supposed to be doing any more: 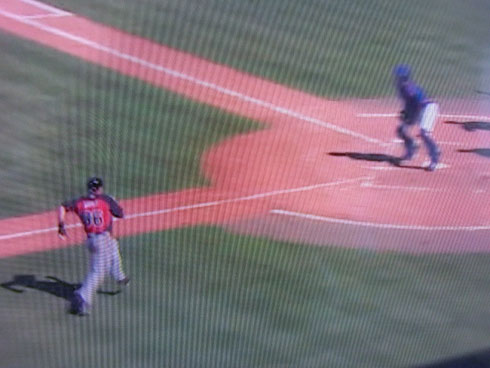 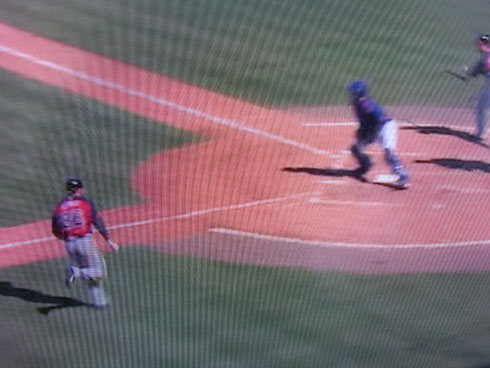 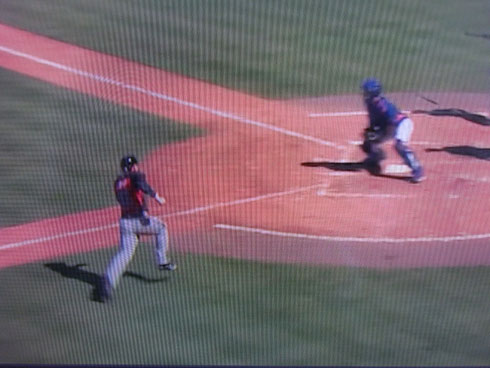 Plawecki was doing it “old school” — blocking home plate without the baseball, not giving the runner a lane with which to run toward home plate. I don’t point this out to pick on Plawecki, but rather to show what many catchers through the years have been taught to do, and what, now, umpires are supposed to call as “obstruction” (which they should have been calling all along). It will be interesting to see if umpires will continue to neglect to cite the obstruction ruling when the real games begin, and if they do, if managers will exercise their option to request instant replay assistance.

Fun to see former St. Joe’s of Montvale (NJ) star Tommy La Stella in game action; hadn’t seen him since his high school days in the mid-2000s (wow, time flies). La Stella spent a year at St. John’s before transferring to Coastal Carolina, where he had two spectacular years and then was drafted by the Braves in the 8th round of the 2011 draft. La Stella is something of a throwback — a hard-nosed, get-the-uniform-dirty second baseman who sports a solid glove, strong fundamentals, and excellent bat control. He reminds me of what middle infielders looked like when I was growing up — not the biggest / tallest guy on the field, but feisty, gets on base, executes bunts and hit and run, makes contact, runs the bases with brains if not speed, and makes all the plays in the field. In other words, guys like Wally Backman, Bucky Dent, Rick Burleson, Ken Oberkfell, Tommy Herr, Bill Russell, Felix Millan, Bud Harrelson. If Dan Uggla continues to struggle, La Stella — who has never been on any top prospect lists — could force his way into the big leagues. La Stella shredded high-A and AA last year, batting a combined .356 with a .444 OBP through 88 games at the two levels (81 at AA). What he has against him is his age — he just turned 25 a few weeks ago, so time is of the essence. It could turn out to be a great underdog story for him and the Braves.

Josh Edgin, not so good. And hasn’t been so good in quite a while, going back to last year. Unless he improves dramatically in the next two weeks, I can’t see him going north with the big club.

My feelings are similar for Kyle Farnsworth. I know that he had a strong down-the-stretch run with the Pirates last year, but he hasn’t shown me anything yet to suggest that he can still be an effective MLB reliever. His results have been OK, but his process, not so much.

Bobby Parnell made his first appearance of the spring, and, considering it was his first time out, he looked OK. It appears that his neck/back disc issue will not affect him going forward.

Kris Medlen ran a bee-line to the clubhouse immediately after a pitch in the fourth inning; he’s been diagnosed with a right forearm strain. Not good news for Medlen nor the Braves, as that is a symptom of UCL damage.

Speaking of pitching injuries, check back here later in the morning for an audio interview I did with Angel Borrelli. We are going to do regular podcasts titled “The Fix,” during which we discuss pitching injuries and how they can be avoided. Hope you enjoy.

Meantime, what did YOU see in Mets spring training game nine? Post your observations in the comments.

BTW the next Mets game broadcast on TV will be today (Monday) at 1:10 PM on SNY.