The Miami Marlins scored eleven runs in a laugher against the Mets. No worries — it’s spring training and the games don’t count. Further, most of the runs occurred in the later innings, when the two clubs were competing almost exclusively with players ticketed for the minor leagues come April.

Bartolo Colon looked good in terms of performance for the first three innings, especially considering it was his first outing of the spring and he has a guaranteed spot in the rotation. His control was pinpoint — as advertised — and he showed off an effective pickoff move. In fact, he picked off Jake Marisnick twice in the second inning, but the umpire called him safe both times (hey, it’s spring training for the men in blue as well). After watching his move closely and in slow-mo, it looks like Colon might be balking, because his upper body moves a few ticks before his feet — in effect, he’s getting a head start because runners are taught to watch the feet. However, Colon’s been getting away with this move for years, so I’d be stunned to see an umpire call a balk on him. It’s kind of like the courtesy afforded Andy Pettitte for many years — Pettitte balked almost every time he threw to first base.

In the fourth inning, though, the Fish figured out — in their second look at Colon — to look for the fastball and only the fastball, and plated three runs. Nothing to get concerned about, because it was clear that Colon was simply focusing on getting comfortable, working on his timing, release point, etc.

What concerned me about Colon’s outing is his arm action — he’s really “short-arming the ball.” In other words, he throws the baseball much like a catcher might, or a dart thrower, with the ball passing close to his ear before moving forward. With that kind of arm motion, the shoulder is not properly rotating and is not involved in powering the baseball. Additionally (and somewhat ironically), considerable strain is placed on the shoulder because it is tightening. If you remember back to when we examined Johan Santana‘s shoulder issues and mechanical flaw, it’s very similar. I’m not sure how long Colon has been throwing this way, but at least one person told me he was doing it while in Oakland, and I remember seeing it while he was with the Yankees. How long can he continue to throw this way before shredding his shoulder? Who knows? A year? Two years? Two months? Two weeks? The only thing certain is that it’s inefficient and highly dangerous — and, most importantly, correctable. Whether he’ll correct it, though, is questionable, as pitchers (and pitching coaches) tend not to fix something that ain’t broke — and “broke” almost always refers to the numbers the pitcher is putting up.

Here are examples of what I’m describing: 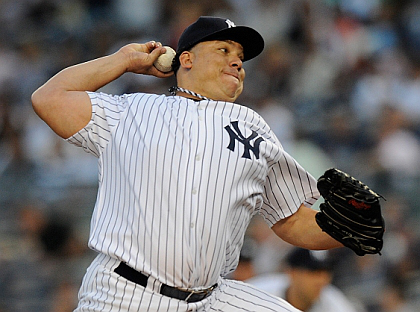 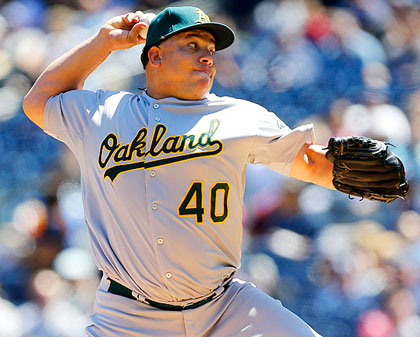 Ruben Tejada booted another ball, and, overall, I didn’t like his body language. He looks like he’s lacking confidence, maybe even a bit scared. One thing’s for sure — you can’t play this game scared. Lack of confidence, and mind games, will destroy a player regardless of his physical talent and skill set. Tejada needs to buck up, and right away, if he’s going to be the Mets starting shortstop. It won’t surprise me to see the Mets make a deal for someone like Nick Franklin between now and Opening Day.

Ryan Reid was similarly unimpressive in his one long inning of work. The SNY gun had his fastball at 89-92 MPH, and it was straight and poorly placed. Too much plate, too much above the knees. Compounding the problem was his inability to throw any of his secondary pitches for strikes.

Ike Davis did not play again, and, reportedly, is in a walking boot to protect his sore calf. Methinks he won’t quite reach the 100 at-bats that Terry Collins hoped to give him in spring training. At this rate, in fact, he’ll be lucky to get 100 at-bats by the end of May.

Lucas Duda was also out again, nursing a sore hamstring. I’m starting to wonder if Duda and Davis are the same person, or, perhaps, twins resulting from heteropaternal superfecundation (go ahead, look it up — I dare you).

The Mets had a few bases-loaded situations — most notably in the first and eighth innings — but couldn’t do anything with them. In the first, Brad Hand worked out of the bases-juiced situation by striking out three straight batters, though he may have had some help from the home plate umpire. Regardless, it’s not encouraging to see the Mets offense continue to fail — spring training or not.

Even Scott Rice faltered in this game. Just a bad day, overall, for the Mets.

Oh, and the umpires were absolutely terrible — the first base umpire, in particular, may have been affected by the heat or something. In addition to missing several calls in the first few innings, he also called a runner out at first base in the 9th on a play in which the ball was overthrown / not caught.

As you may have figured out by now, I have a soft spot for local boys, especially those hailing from New Joisey. That said, it was fun to see former Colts Neck High School standout Anthony DeSclafani toss two scoreless innings. DeSclafani, obtained by the Fish in the 27-player deal that sent Jose Reyes to Toronto, looks like the real deal. He may not be a future ace, but he’s got the goods to pitch at the big-league level, and it won’t surprise me to see him in MLB at some point this year, maybe as a spot starter in the second half. By the way, why does it seem like every ballplayer from Jersey is Italian?

So, that’s what I saw. What did you see? Post your observations in the comments.

Back Josh Edgin Among First Cuts from Mets Roster
Next Mets Squeeze Past St. Louis in ST Game 11