Josh Edgin was one of more than a dozen players booted to Mets minor league camp. Cited was his unimpressive velocity — and we can easily illustrate the reason for his drop in MPH.

No real surprises here, other than possibly Edgin, who figured to compete for a LOOGY spot to pair with holdover Scott Rice. But Edgin’s spring appearances were underwhelming, and his velocity is down considerably.

Interestingly, in several blog and news posts regarding Edgin’s demotion, the headline mentions the lefty’s diminished velocity, while also running this photo: 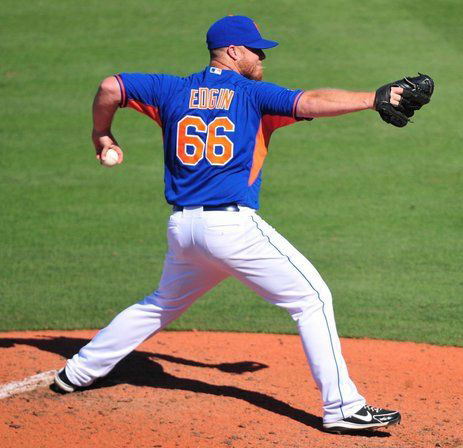 This is an excellent photo in that it captures Edgin’s motion at a very, very important time — foot strike, or, the point when the front foot touches the ground. It’s at this point that a pitcher — in order to hurl the ball safely and efficiently — must have the baseball up in the air, at about a 90-degree angle from the bicep section of the throwing arm, which should be about parallel with the ground and pointed somewhat toward the sky. This point is similar to the “launch position” for a hitter — the spot where the batter has his hands at the highest point at the moment his stride foot hits the ground.

Empowered with this knowledge, take another look at Edgin. Where is his left arm? The bicep is about parallel with the ground, but pointing to the ground. The ball and his left hand are at about a 90-degree angle to the bicep, but pointing to the ground. What this means is his arm is WAAAAAAAY behind the rest of his body. As a result, his arm has to do nearly all the work in creating velocity. Ideally, the entire body powers the ball — the upper and lower half work in sync.

How can Edgin fix this? First, he needs to be aware of it. A longer stride might give his arm time to “catch up” to the rest of his body. Maybe there’s a point somewhere earlier in the motion where he’s doing something extra with his hands that’s causing the arm to be behind. I’m not entirely sure, as I haven’t been able to obtain video of him from several angles. But if he is regularly landing with his arm in the position that is illustrated above, then not only does it explain Edgin’s diminished velocity, but it could also lead to an arm injury, because most of the strain of pitching is placed on the arm.