What Do We Blame It On This Year?

Ever since the knee-wobbling Adam Wainwright curve that froze Carlos Beltran in October 2006 (a-ha! that’s how he broke his knee!), the Mets have had very distinct “reasons” for not making the playoffs.

We need to know what “it” is, and it needs to be specific — otherwise, what will Omar Minaya and co. do this offseason? They need something to “address” during the winter, and placate we angry fans. If they don’t fix anything, we won’t be inclined to buy 2011 season tickets, after all.

Post in the comments what you think will be spun as the thing that needs to be fixed this offseason.

We were hoping for a sweep, and depending on what happens in game four, we just might get one. Unfortunately, it won’t be the Mets pushing the broom.

Mike Pelfrey struggled in the early innings, allowing the Braves to build a lead that the feeble Mets offense could not surmount.

The Braves were hitting him solidly, mainly because Pelfrey was up with his pitches and getting too much of the middle of the plate. Also, I think Pelfrey may be tipping his pitches, based on the fact that his follow-through is usually different depending on the pitch he throws. Most of the time, if his follow-through turns his face and body completely toward first base, it is a fastball (though on occasion it is a curve). When he finishes more straight and facing home plate, it is either a change-up / forkball or a curve — i.e., something off-speed. Obviously, the follow-through is too late for a batter to identify the pitch, but Pelfrey has to be doing something earlier in his motion that results in those different finishes. Since we never, ever get a camera view from behind home plate, it’s hard to say what exactly the hitters are seeing. It could be as simple as an extra twist of his front shoulder, his chin moving slightly backward, or something with the movement of his hands — something he does early affects the end result (for every action there is an equal and opposite reaction). My guess is that batters are picking up on whatever it is, and though they may not know the location of the pitch, they may have a good idea of the velocity that’s coming — which nullifies the strategy of keeping a batter off-balance by changing speeds.

Tommy Hanson pitched well, but watching his mechanics make me squirm. It looks like his arm is going to fly right off his body, the way he stays upright and uses arm speed for velocity and curveball spin. Because he doesn’t allow his head and body to drive forward and down, all of the deceleration of his arm is absorbed by the shoulder rather than the legs. Though his genetics could overcome his mechanics, if I were a betting man, I wouldn’t bet that Hanson will stay healthy over the next few years.

Lucas Duda made his Major League debut in this game, and the ball couldn’t stop finding him — it seemed like he touched it about 15 times. To his credit, he handled the workout flawlessly, looking impressive on a few plays. Every time the camera focused on him, though, “Puttin’ on the Ritz” went through my head — he kind of has this Peter Boyle thing going on — Boyle with a surfer dude twist. He is a big boy who may have some wallop in his bat, so it should be fun to watch him this month and see what happens.

If I’m walking down a dark alley, I want Duda and Mike Hessman on either side of me.

Freddie Freeman also made his big-league debut, playing first base for the Braves. He kind of has a young Chipper Jones thing going on, which doesn’t bode well for Mets fans.

Jason Heyward went 4-for-4 with two doubles, a run, and an RBI, and nearly stole second base without a pitch being thrown. His strike zone judgment and ability to hit the other way are extremely impressive for a 21-year-old — his approach is like that of a ten-year veteran. I am trying hard not to refer to him as “Ironhead”.

Did you know “J-Hey” was born in Ridgewood, NJ? Not sure how he ended up in Georgia — must be kind of like how Derek Jeter was born in Pequannock, NJ.

Jeez, those Braves have a bunch of youngsters with talent — Freeman, Heyward, Hanson, Jonny Venters, Jair Jurrjens, Mike Minor, Eric O’Flaherty … and LHP Mike Dunn coming up next. Kind of reminds me of the all the youngins’ on the Mets right now, only different.

The Mets had two hits in the game. TWO. On the bright side, a lack of baserunners meant there were only 3 LOB.

The final game of this wretched four-game set occurs at 7:10 PM on Thursday night. Good thing it is also #CabernetDay on Twitter, as I have a feeling the Mets will drive me to drink. Johan Santana takes the mound against Tim Hudson. 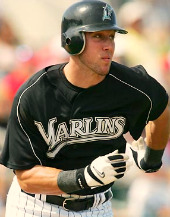