When the Carloses Go Cold 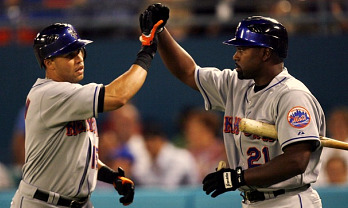 There is something really, really frightening about the Mets’ current struggles — the hot streaks of the Carloses.

Carlos Beltran is absolutely on fire, in one of those “zones” that he finds 2-3 times per year. Similarly, Carlos Delgado is blistering the ball to all fields, driving deep bombs over fences, and, for a while there, was looking like the guy who carried the Mets on his back for the second half of last year.

So why is this a problem?

Because despite both Carloses hitting the bejesus out of the ball, the Mets are still losing. Which begs the question: what happens when the Carloses cool off, which considering each’s past history as red-hot / ice-cold streak hitters, is a guarantee? Further, if the Mets can’t stay above .500 with their two most dangerous hitters on fire (and David Wright and Jose Reyes both over .300), how in the world can they win when the Carloses go cold?

Don’t look now, but Delgado is already cooling off — his average has dropped nearly a hundred points in the last eight days. Beltran looks like he can stay warm for at least a few more weeks, but will it matter? 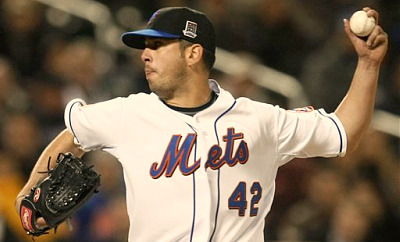 Dr. Perez showed up for this game instead of Mr. Hyde, and delivered six strong innings to deliver a much-needed victory for the New York Mets.

This one was reminiscent of a 2008 ballgame: Mets jump ahead, Mike Pelfrey has control issues, loses the lead, gets it back, and barely gets through five, and the bullpen keeps us on the edge of our seat through the final out. If this were 2008, we’d expect the offense to go to sleep after the fifth. But this is 2009, and the offense did something that was rarely seen last year: they tacked on runs in the later innings.

Carlos Delgado gave the Mets a two-run lead with a prodigious blast in the top of the first, but Joey Votto did one better with a not-so-prodigious but more productive fly ball.

It took Pelfrey 43 pitches to get through the initial inning, an early signal that the bullpen would play a key role in the contest.

However the Mets came back with three runs in the fifth, when Delgado grounded out with the bases loaded and Carlos Beltran followed with a two-run single. Delgado added another run in the seventh, singling in David Wright. The two Carloses combined for 6 of the Mets’ 9 runs on the night.

Brian Schneider broke the game open in the seventh with a three-run double to make it easy on the bullpen, which was less than perfect.

Luis Castillo made several key defensive plays throughout the game, including a throw to home to cut down Joey Votto attempting to steal home on a pickoff attempt.

Big Pelf was falling behind with his sinker, which was running too hard and far in on the righties / away from the lefties. My guess is he was having trouble getting a good grip on the ball in the cold weather, and/or his thumb was a little too high and to the side of the ball at the release. When the thumb slides up, the ball will go flying in the opposite direction. Cold, slightly humid weather can make the ball feel slick and cause that to happen.

Bobby Parnell started off the sixth with two quick outs, then walked the next two batters. He was saved by Darnell McDonald, who showed why he spent 11 years in the minors by swinging at the first pitch (out of the strike zone) following a four-pitch walk. McDonald fell behind 0-2 and grounded out weakly to end the almost-rally. Parnell was hitting 94-95 MPH on the radar gun with his fastball, but was unable to spot the slider in the strike zone.

Pedro Feliciano and J.J. Putz gave up a run each in the 7th and 8th, which was OK since the Mets had a significant lead. However, Francisco “Don’t Call Me K-Rod” Rodriguez made things interesting in the ninth, giving up another run(wow it sure felt like he did) loading the bases with one out before retiring the side on a strikeout and a long fly ball to the warning track. Get used to this, Mets fans — Frankie was famous for these thrillers in Hollywood.

Nine walks by Mets pitchers in this game. That’s too many, for those who aren’t sure.

K-Rod threw 30 pitches; is he available to close on Thursday afternoon?

The Mets and Reds do it again in an early afternoon game tomorrow at 12:30 PM EST. Oliver Perez goes against Bronson Arroyo. Arroyo had been suffering from carpal tunnel syndrome, but reportedly is OK after a cortisone shot. Too much guitar playing?

Put Up or Shut Up

Pitchers and catchers have yet to report … indeed, it’s not even Christmas yet … and the Mets – Phillies verbal rivalry has already begun.

Perhaps ignited by Cole Hamels’ admission that the Mets are “choke artists”, recently signed closer Francisco Rodriguez pronounced that his new Mets are “the team to beat”.

Unfortunately, that phrase was already used by Carlos Beltran, who whispered it last March. Beltran, of course, stole the words from Jimmy Rollins — who originally made the proclamation a year earlier.

The verbal sparring is wonderful for the media and exciting for some fans, as it helps to stoke the rivalry between the Mets and Phillies — which in turn sells tickets and newspapers and drives up the blog comments and website pageviews. A win-win for everyone in this down economy, in fact.

But the crux of the matter is this: for every Mets fan that gets riled up by K-Rod’s quote, there are another ten who wish the players in orange and blue would simply keep their mouth shut. The more the Mets talk, the more pathetic they look in the end, when they can’t close the deal.

Aside from the 1986 Mets, there haven’t been too many Flushing squads (if any) who had both the talent and the fortitude to see through such brazen declarations. Looking back, that cocky bunch spoiled us, and helped open the lid on big mouths in sports.

Today, however, the Mets do not have the talent to steamroll over the rest of baseball. It looks like they’ll have a good team, one that can compete for the NL East title. I’m not saying they won’t run away with the flag next year — I’m saying that right now, they don’t appear to have an exceptionally dominating team.

Further, K-Rod and J.J. Putz by themselves will not drastically change the mentality in the clubhouse. The Mets remain a leaderless team, and devoid of the “killer instinct” necessary to throw their opponents down to the ground and stomp on their necks. Again, it doesn’t mean they can’t win in ’09 — it simply means they don’t have any business making public announcements regarding winning or talking trash. Not yet, anyway.

In retrospect, Beltran’s utterance last spring was all-too-revealing. It was said off the cuff, after taking some BP, with a laugh, and seemed he was half-joking. From the Daily News:

“We’ve got what it takes. We have good chemistry as a team. He fits great because he’s a great guy. He’s one of the best pitchers in the game. Who doesn’t want to have him on any ballclub? Without him last year we did good, until the end of the season. So this year, to Jimmy Rollins, we are the team to beat.”

With that, Beltran walked off, amused and chuckling as he told unnerved P.R. man Jay Horwitz, “Have a happy day.”

Judging by what happened (again) in the last weeks of September, perhaps Beltran WAS joking.

The irony, of course, is that Beltran’s last at-bat of the 2006 NLCS — the one where an Adam Wainwright yellow hammer froze him and ended the Mets’ season — is symbolic of the team’s reputation as chokers, making Beltran’s quote all the more embarrassing now. More damaging is that not only did the Mets not deliver on Beltran’s preseason boast, but that they choked again.

So when Cole Hamels agreed that the Mets were “choke artists”, we fans really had no response — except to bow our heads and nod in agreement. And when K-Rod comes out and starts the cycle all over again, we Mets fans want to run and hide, cover our faces, muttering “please, not again!”.

It’s kind of like watching a TV show or a movie, and the lead character (Archie Bunker comes to mind) is about to say or do something you know he/she is going to regret — you yell at the screen, “no, don’t SAY IT!”. Or when you’re sitting around the Christmas tree, and conservative Uncle Bob has had too much egg nog, and he’s about to start talking politics with liberal cousin Joan. Some things should just be left unsaid, before everyone is embarrassed.

Don’t get me wrong — I love the idea of a rivalry between the Mets and Phillies. But let’s see it erupt on the field, not in the headlines. Instead of continuing to talk about how great and unbeatable you are, please, New York Mets, take a page from the Nike book and just do it.