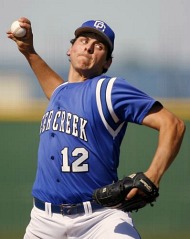 Remember when the Mets allowed Pedro Feliciano to move crosstown to the Bronx as a free agent? Well, in return for losing the LOOGY, the Mets received a supplemental pick after the first round of the draft this past June, and they used it to draft high school pitcher Michael Fulmer. According to Baseball America, Fulmer has signed with the Mets for a little under a million dollars — $937,500 to be exact.

Fulmer is 6’2″, 200 pounds, righthanded, and reportedly throws in the mid-90s. I haven’t seen much of him other than the few videos around the internet so can’t comment. You can see for yourself in this youTube video:

Here is the word on Fulmer, direct from an official Mets press release: