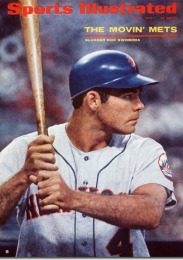 Before Endy Chavez, “The Catch” in Mets history referred to the diving snare made by Ron Swoboda in the 1969 World Series.

I had the great pleasure of talking to Ron about that catch and how he turned himself — through hard work, pride, and dedication — into a Major League outfielder capable of making one of the most legendary catches in the history of New York baseball.

If you are an outfielder, a parent of an outfielder, or a baseball coach, you must listen to this podcast, because Ron provides plenty of tips and techniques on how to play the outfield — and he pulls no punches (there’s one part where he criticizes Shane Victorino!).

You can listen to the podcast through iTunes or at the OnBaseball.com site here:
Ron Swoboda on Outfield Play