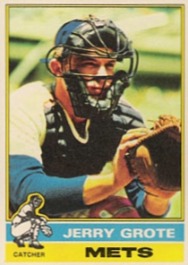 During my time at Citi Field yesterday, I had the chance to speak with former Mets catcher Jerry Grote. A big thrill for me, since he, Thurman Munson, John Stearns, and Johnny Bench were the four men who inspired me to play baseball and play the catching position during my childhood. My “interview” with Grote was a complete surprise — I had no idea he would be at the park nor that I’d have the opportunity to speak with him — so it took me a minute or two to think of a good question.

My first question was (which isn’t on the recording below): “How do you feel about the catching position today compared to 20 or 30 years ago? Are catchers improved, the same, or worse, and why?

My second question, which you should be able to hear, was in regard to the catcher’s role in pitch-calling.

It’s only about two minutes in length, and there’s a bunch of background noise from autograph seekers and other sounds from inside the stadium, so please excuse the informality and unprofessional quality of the recording. Enjoy.

Stearns, in fact, was a tremendous athlete and a tough S.O.B. After leading the country in homeruns, he was the second overall pick by the Phillies in the 1973 draft (right behind high school phenom hurler David Clyde) and was also a 17th-round pick of the Buffalo Bills (he played in four bowl games as a defensive back for Colorado). Interestingly, Stearns was picked ahead of

Loyal readers of MetsToday know that I’m a catcher. Do you know why I’m a catcher? Because when I first became aware of baseball (thanks to WOR and WPIX), in the mid-1970s, my two favorite players were Thurman Munson and Jerry Grote — both catchers, both wore #15. Therefore, since there are 15 Days Until Pitchers And Catchers Report, we honor Jerry Grote.

Contemporary Mets fans most closely associate the number fifteen with Carlos Beltran, and that’s fine. To me, #15 on Beltran’s back is weird; it’s like seeing a single-digit number on a pitcher’s uniform, or #99 on a quarterback’s jersey. Because the number 15 (and 5, for that matter) is supposed to be a catcher’s number — but that’s my issue.

How did Jerry Grote grab my attention in my formative years? Because he was a bad ass (or a red ass, as some of his employers and teammates described him). His nasty character begins with his name — pronounced “grow-tee” — which sounds like the short name for grotesque, or gross. You didn’t need to meet him to know he was mean, you need only look at his baseball card — his grimace and threatening eyes burned through you. Grote was the catchers’ catcher, a throwback to another time. He caught with two hands, sans helmet, in a dirty uniform and with a menacing aggression.

John Strubel wrote a fitting, accurate profile of Grote earlier this winter; here is a snippet:

Grote’s desire to win led to unparalleled intensity on the field. During his 12-year career in New York, teammates labeled Grote surly, irascible, testy and moody. Then, there’s Koosman’s description: “If you looked up red-ass the dictionary, his picture would be in there. Jerry was the guy you wanted on your side, because he’d fight you tooth and nail ‘til death to win a ball game.”

Grote played with an anger and intensity that was, at times, intimidating to opponents, umpires, the media and teammates alike.

“When I came up I was scared to death of him,” said Jon Matlack, winner of the 1972 Rookie of the Year award. “If you bounced a curveball in the dirt, he’d get mad. I worried about him more than the hitter.”

Jerry Grote he had no fear, took crap from no one, and poured every last ounce of himself onto the field. Looking back at them now, his offensive numbers look underwhelming, but for the era his hitting was acceptable considering what he provided behind the plate. His first priority and main value was his ability to absolutely control the defense, call a ballgame, and properly handle a pitching staff — and his accurate, shotgun arm was lethal to would-be basestealers. In his heyday, he threw out 45-50% of basestealers and prevented many from taking off — important in the pitching-dominant NL in the late 1960s. Even into his early to mid-thirties, when his battered body was older than his age, he was able to gun down 30-35% of baserunners — which was still about average for the time.

How great was Grote behind the plate? Ask Tom Seaver and Nolan Ryan, both of whom included Grote in their Hall of Fame induction speeches. Intangibles may be immeasurable, but they can also be invaluable.

To this day, when I squat my creaking knees behind the dish, I channel my inner Grote — the ultimate bad ass.

Other #15s who you may remember include Claudell Washington, George Foster, Al Jackson, Rick Aguilera, Jose Vizcaino, Matt Franco, and Ron Darling (when he wasn’t wearing #12 or #44). Which #15 do you remember, and why? Post in the comments.

Red Murff, the New York Mets scout who discovered Nolan Ryan, died at the age of 87 in a Tyler, Texas nursing home on Friday.

The former Milwaukee Braves pitcher had a brief Major League career in the 1950s — making his rookie debut at age 35 — before moving to coaching and scouting. He was mentioned during Ryan’s Hall of Fame induction speech:

“He thought when he saw me at 6-foot-2 and 140 pounds, he wasn’t discouraged by my build and by the way I threw the baseball as many other scouts were,” Ryan said. “And I appreciate the fact that Red spent so much time with me and worked to help me become a better pitcher. Thank you, Red.”

“He was an amazing person,” Vilade said. “He lived a long life and was a great ambassador to the game of baseball.

“He was an inspiration to all. Even after he retired he inspired kids to be great baseball players and great citizens.”

In addition to Nolan Ryan, Murff also signed Mets standout catcher Jerry Grote, and is credited for encouraging Phil Niekro to use the knuckleball in game situations.