Link Roundup: Getting Ready for the Season

Practice baseball is almost over, and Opening Day is coming up on April 1st (no foolin’).

Several projections and previews are in, but we’ll never know what happens until the games are played, no?  My favorite projection is this one by Sports Illustrated for its even-handedness.  Also for this intriguing quote by a scout which is sure to fire up the haters on Twitter:

Speaking of haters on Twitter, a lot of us like to tweet with other fans during Mets games.  Daily Stache has a handy guide of Dos and Don’ts for those of you who are new to the Mets Twitterverse.  On an egotistical note, I agree with his list of people to follow, but I also humbly suggest you follow a certain @PaulJFesta as well.

Even though the season is four days away, there is still time for new acquisitions – as long as they can be had at bargain-basement prices.

In other news, VP of Business Operations Dave Howard left the Mets to join MSG.  Leaving the Wilpons to work for Dolan?  Is there more to this than what we see on the surface?

Also, Jay Horwitz was on the Today Show, and SI will have a piece on the promise and tragic end of a former Mets prospect.

Have a great week/weekend, and keep checking out Mets Today.

Yesterday’s “Tweet of the Day” honor goes to NotJeffWilpon: 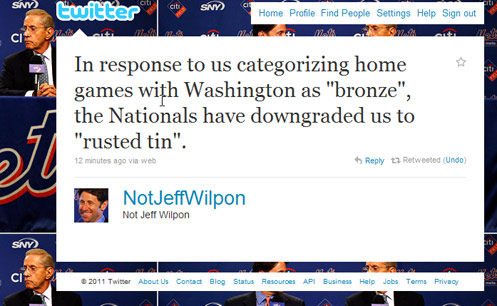