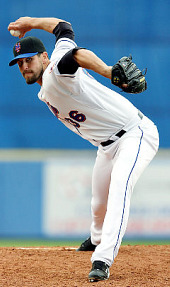 O’Day earned a bullpen spot on the strength of a sparkling 2.57 ERA and 1.07 WHIP in 14 spring training innings. His submarine delivery had a nice “funk” that would’ve pleased Willie Randolph and gave Keith Hernandez a reason to use the term “laredo”. More importantly, O’Day threw strikes and got ground balls, giving the Mets reason to believe they found an efficient replacement for Joe Smith.

Through 4 games as a Met in the regular season, Darren O’Day posted a 0.00 ERA but allowed a hefty two baserunners per inning. In his debut appearance against the Reds he came into 5th-inning mess started by Oliver Perez. With men already on first and second, O’Day hit the first batter he faced to load the bases, but got a short fly out from the next. He then gave up a ground ball single to Paul Janish that bounced beyond the reach of Jose Reyes and scored two runs before getting another short fly to end the inning. Not a great way to begin.

O’Day made his next appearance the very next evening, entering the ninth inning of a 4-4 tie with the Marlins. Pedro Feliciano had allowed a single and retired two batters, but this was the beginning of Jerry Manuel’s season-long obsession with “matchups”, so Feliciano exited when the righthanded-hitting Hanley Ramirez came to the plate. O’Day walked the eventual batting champion and gave up a single to Jorge Cantu to make Feliciano the losing pitcher. Thus far, O’Day was not warming the hearts of Mets fans.

But he was right back on the horse the very next day, throwing 33 pitches in 1 1/3 innings to help preserve an 8-4 win — though, he did allow two unearned runs. In three days he threw 53 pitches and was not yet impressing anyone.

Four days later he threw his final game as a Met, hurling a 1-2-3 sixth inning in a loss against the Padres that was significant in that Heath Bell earned the save and Duaner Sanchez a hold.

On April 18th the Mets began an inexplicable flurry of moves that began with O’Day being placed on waivers and ultimately resulted in the promotion of Ken Takahashi. In the process they ticked off Nelson Figueroa (which resulted in them being ticked off by Figgy) and subjected Mets fans to four innings of Casey Fossum. And all this was done because the Mets didn’t want Mike Pelfrey to miss more than one start. Pelfrey, you see, had elbow tendinitis, (you forgot about that, didn’t you?) but the Mets didn’t want to put him on the 15-day DL. DO YOU SEE WHERE THIS IS GOING? Mind you, this was long before the rash of “bad luck” hit the Mets and sent half the team to the infirmary. So really, were the Mets “unlucky” to have lost so many players to injury, or is it a wee bit possible that their aggressive, prehistoric treatment of injuries had something to do with all the games missed by key players?

Fittingly, less than a week after O’Day was DFA’d (and Figueroa demoted), Jerry Manuel was talking about adding an eighth reliever to the bullpen, which he felt was being overworked.

Even more fittingly, Darren O’Day was picked up by the Rangers and appeared in 64 games for Texas, posting a stingy 1.94 ERA and microscopic 0.94 WHIP. Yes, his first three games as a Met were bad — but it was only three games. Moreover, at the time of his DFA, Sean Green and Brian Stokes were just as ineffective, and the right move at the time was to put Mike Pelfrey on the DL.

Would O’Day have pitched as well as a Met — and in Jerry Manuel’s head-scratching system of situational matchups? We’ll never know, but you tell me: right now would you rather have a 26-year-old sinkerballer with a 1.19 career WHIP or a 40-year-old LOOGY against whom lefties hit .302 AVG / .859 OPS ? Not that it matters, because right now, the Mets have neither.

(by the way, Metstradamus is doing a similar player-by-player analysis — see his “What Have You Learned? Darren O’Day”)

Back Beltran to Boston?
Next Why and How the Mets Should Trade for Roy Halladay