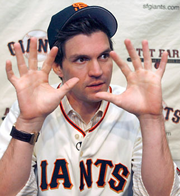 Coming off three wins in Arizona, the Mets find themselves in the same spot as before the Left Coast trip started: tied with the Braves for first place.

They now have a three game set against the San Francisco Giants before returning to Shea Stadium and games that end before the Dunkin Donuts guy heads out to make the doughnuts.

As Mets fans, we walk on egg shells every time an Oliver Perez start approaches. Is he really the dominating guy of 2004, the one who threw 20 consecutive strikes against the Braves one fine Saturday afternoon at Shea? Is he the stopper that keeps the Mets out of losing streaks, such as his win over the Marlins that prevented a sweep? Or is he still prone to meltdowns, such as the seven-walk affair against the Phillies in Game Eight? What we do know, is that when he’s “on”, he’s awesome. When he’s not, there’s no in-between — he’s godawful.

Meantime, the “other” Barry on the Giants is not quite earning his paycheck just yet. He has a fine 3.52 ERA but only two wins against three losses. Not quite what you’d expect of someone with a nine-digit contract.

Barry Zito is a soft-tosser along the lines of Tom Glavine, except that he has one of the most devastating 12-6 overhand curveballs in the game. If the curve ain’t working, however, Zito can get into trouble in a hurry. Considering that the Mets batters — particularly Carlos Beltran — are put into fits by curveball artists, it could be a long night for the offense. Actually, it would be a pretty short night, now that I think of it.

One other caveat: though Zito is a longtime Major Leaguer, he’s never faced the Mets. Therefore, the Wandy Rodriguez Effect is in his favor.

Will Glavine ever get to career win #294? This will be try #5, and one would think the big 3-oh-oh is starting to become a unclimbable wall in his mind.

While Glavine works with his inner demons, the Mets batters will be facing one of the top young righthanders in the game in Matt Cain. Cain is the young version of Jason Schmidt — and in fact the reason Schmidt became expendable after the 2006 season. His hard sinker and sharp curve can be devastating at times, but as a youngster he can also beat himself at times. The Mets’ best approach would be one of patience, as he can fall into control lapses and pitch-limit himself out of the ballgame early.

What can we say? John Maine is right now one of the hottest pitchers in all of baseball. Let’s hope he keeps it that way in the Frisco Bay.

Matt Morris is the guy that Matt Cain could evolve into if he doesn’t become the next Jason Schmidt: a guy with a lot of talent who falls too much in love with his curveball, tries to strike out too many hitters instead of pitching to contact, and ten years later has people shaking their heads saying, “what happened to this guy on his way to several Cy Young Awards?”.

At one time, Morris was a 22-game winner, and the ace of a staff that included Chris Carpenter. Today, he is a shell of his former self, but still picking around the plate and not challenging hitters with his sinking fastball. That said, it would be silly of the Mets hitters to be aggressive against him; given time, he’ll pitch himself out of the game.

For a much more detailed and insightful overview of the Giants’ starters, head over to MetsGeek.

Reading the above capsules, it’s obvious that the team hitting approach should be one of patience. All of the Giants starters in this series are prone to bouts of wildness, and will walk themselves out of ballgames. As always, everything starts with Jose Reyes — he sets the tone. If Reyes can show some patience in his first at-bat of the game, perhaps draw a walk, the rest of the lineup will likely follow suit, slowly wearing down the starter. Looking at the Giants’ bullpen, anchored by closer Armando Benitez, it doesn’t take a genius to buy into such an approach. The earlier the Mets can get into the San Francisco bullpen, the better their chances of winning a game.

Barry Bonds is back on HGH and performing at his unrealistic, Gameboy-like levels. The key to keeping Barroid from hurting the Mets is to throw strikes to the hitters ahead of him — none of which are serious threats. If Bonds comes to the plate with a base open, I’d much rather see a Met pitcher plunk him than waste energy on four balls. Naturally, the ball would not be able to penetrate the various shields of armor worn by the sissy slugger, but there’s a good chance he’d react in a fit of ‘roid rage and get himself tossed from the game.

On second thought, it’s probably better that the SNAC poster boy stays in the game — it’ll be much easier for the Mets to get base hits against only two outfielders.

Back Ricky Ledee Next in Line
Next Mets Game 31: Loss to Giants