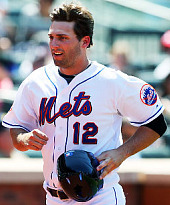 We’ve mentioned a few times here that Jeff Francoeur’s return to Flushing in 2010 is not a guarantee — though his red-hot finish in August and September cemented his popularity among the fans still paying attention to the team — and we know the Mets’ front office likes to appease the public. But would the Mets consider passing on Francoeur’s arbitration if they go for the big fix?

Francoeur’s salary in 2009 was $3.375M. Through the arbitration process he almost surely will get a raise to $3.5M or possibly as high as $4M. Will the Mets be willing to pay that much for a righthanded-hitting corner outfielder after shelling out $100M+ for Holliday or Bay? I would hope so, but you never know what the Mets are thinking.

For example, couldn’t you just see them taking the approach that having both Holliday/Bay and Francoeur creates a lineup that is “too heavy with righthanded hitters” ? And in turn non-tender Francoeur, and make the right field job a competition in spring training among Angel Pagan, Fernando Martinez, and any cheap free agents that may arise (Chad Tracy? Jermaine Dye? Eric Hinske?).

The Mets would of course heavily spin the “gritty” personality, hustling, and leadership skills of Bay/Holliday to offset the loss of Francoeur’s similar traits.

Personally, I enjoy watching Francoeur play and hope he returns. But I’m not sure the Mets believe there’s enough room in their budget the outfield for both Jeff Francoeur and a “big-ticket leftfielder”.

Back Why and How the Mets Should Trade for Roy Halladay
Next 2009 Analysis: Omir Santos