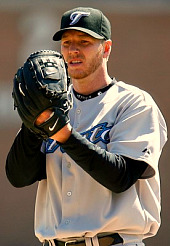 This is undoubtedly good news for Omar and co.– surrendering four-five star prospects for any pitcher into his 30’s will give any (smart) general manager cold feet. Fortunately, given the lack of trade partners, the Mets could conceivably acquire Halladay without giving up any elite prospects. By that I mean you can start by crossing Fernando Martinez, Jenrry Mejia, Wilmer Flores, Ike Davis, and possibly even Jon Niese off the list.

The Mets should almost certainly capitalize on this opportunity.

First, let’s establish just how good Halladay is. According to FanGraphs, Halladay has been worth 14.7 wins ($66.5 million) over the last two years. Assuming the Mets sign him to a five or six year extension, worth around $80-90 million, Halladay could easily have another seven win season or two left in the tank- perhaps even an eight win year, when you account for the fact he is moving to the National League, plus a couple of four-five win seasons afterwards. In some respects, that could be conservative, as Halladay is simply in that Randy Johnson-Roger Clemens-Curt Schilling kind of class where I could see him being effective into his early 40’s. His recent rise in strikeout rates is no mirage; from 2006-2007, he was striking out just 15% of hitters. For two seasons now, he has been around 20%.

The best pitcher on the free agent market right now is John Lackey. He is two years younger, but you cannot purchase a clean bill of health; Lackey has battled all kinds of strains over the last two years- including his contract year no less- enabling Halladay to pitch a combined 126 more innings than Lackey. Right there, Lackey’s value takes a tremendous hit.

Lackey and Halladay are just not in the same class, however. Halladay’s FIP over the last two years is almost a full run better, including his 1.5 edge in 2008. Take a tick or two off Lackey’s peripherals, and you are quickly looking at an expensive league average pitcher. The difference between Halladay and Lackey over the next several years is about 3-5 wins per year (about over $12 million to over $20 mil.)

The Jays’ needs dovetail with the Mets so well, and vice versa, it almost makes too much sense. So here is what I propose:

Why it Makes Sense from the Mets Perspective:

We have already illustrated how good Halladay is. The Mets need at least two dependable starters next year, and no one fits the bill like Halladay does. Landing him would be a true splash and help sell tickets next year.
Overbay is an excellent solution to the Mets void at first base. He gives them above average production at the plate (.265/372/.462/.363 wOBA). Last year he walked in almost 15% of his plate appearances – the ninth-highest rate in the American League.

According to UZR, Overbay was the second-best defensive first baseman in the AL in 2007, behind defensive stud Casey Kotchman. He fell to fourth in 2008 (2.3 runs above average) and was fairly mediocre in 2009 (-1.7). Still, he can be counted on for average-above-average defense.

Overbay will make $7 million in the last year of a four year, $24 million dollar deal he signed with the Jays prior to the 2007 season. He has generally been worth $8-9 million for several years now. This is convenient for the Mets; Adam LaRoche, the only dependable free agent solution and a player of similar value to Overbay, will be seeking more money over 3-4 years. The same goes for Russell Branyan, who will likely re-sign with Seattle anyway. Overbay gives the Mets more flexibility if Ike Davis proves he is ready by 2011.
Southpaw David Purcey is a classic high ceiling throw-in the Mets could potentially make useful, ala John Maine or Oliver Perez. The Jays have no room in their rotation for the 14th overall pick back in 2004, who is already 27. Purcey’s last two years in the big leagues are less than impressive; In 113 combined innings, he has struck out almost 19% of hitters, but walked 11.52%, posting an FIP of 4.71 and 5.09, respectively.

• He works in the high 80’s- low 90’s with his four-seamer and two-seamer. His four seamer has very good movement, but he has trouble commanding it and tends to leave up in the zone. He struggles mightily with commanding his sinker.
• His curveball has good-very good movement, but tends to hang it
• Slider is very inconsistent, but shows flashes of brilliance. Lacks confidence.
• Has good movement on his changeup, but leaves it up in the zone.
• Overall good speed differential.
• Control a major issue.

If Purcey moves to the bullpen, he can improve his fastball velocity and try to harness his changeup and a breaking ball. It is a longshot, but these are the type of high-ceiling arms the Mets should build their pen around.

As a contending team, the Mets simply cannot afford to have Daniel Murphy start at first base next year, who is overrated in sabermetric circles. He hit just .266/.311/.427 last year, and his xBABIP (.297) is just nine points higher than his actual BABIP. While Murphy has tried to add more loft to his swing, the power ceiling just is not there. He is a smart ballplayer with very good plate discipline, but he lacks the bat speed and swing to hit a mistake nine miles.

In the best-case scenario, he hits .290/.350/.450 next year, and there is a huge downside there as well. It is foolish to count on his high UZR numbers at first last year, as UZR is very inconsistent on a year-to-year basis, particularly when looking at such a small sample size.

Thole will be missed, but again, he lacks a very high ceiling. Within a year or two, he can very well be counted on to hit around .300 with an OBP. north of .350, but I am skeptical about him developing power, due to his choking up on the bat and lack of stride. Valuable yes, but you have to give up talent to get talent, and the Mets might be better served with someone more experienced next year.
Tejada is a promising youngster, but he is blocked by Jose Reyes at short, and I am a big fan of Reese Havens at second base in the future. If Marte and Allen work out, this one could come back to bite the Mets, but they are at least 3-4 years away from contributing in the big leagues, and the Mets boast plenty of lower level talent.

Why it Makes Sense from the Jays Perspective:

The Jays are pretty well set for next year with pitching talent. After you get past their outfield and Aaron Hill at second, however, there are holes galore. I have always been of the belief that teams like the Jays, with less payroll flexibility than the Mets, value 2-3 win players far more (in the Mets case, they are far more easier to replace). With or without Overbay, the Jays lack an obvious replacement at first (their 2008 first round pick, David Cooper, was a tremendous disappointment in AA last ear), so Murphy is a good fit.
With Rod Barajas and Marco Scutaro likely to depart as well, the Jays lack a catcher and shortstop. J.P. Arencibia no longer looks like the catcher of the future, and Thole is big league ready. Tejada will probably be ready to step in at short by 2011, where he is most valuable.

Marte and Allen give them two high ceiling players to balance out the otherwise less-than-stellar talent. Allen looks ready to take a big step forward in the Florida State League next year, and Marte is just 18 years old and was rated as high as Wilmer Flores entering 2009.

This move would seem to indicate the Jays are conceding 2010 more so than some of their fans are like, but it is probably the right step to take, and gives them some possibly very good role players (or better) to pair with Travis Snider, Adam Lind, and Hill as early as two years from now. For the Mets, the possible gains far outweigh the risks, and Halladay is undoubtedly undervalued at this point.

Back 2009 Analysis: Darren O’Day
Next Will Holliday or Bay Affect Francoeur?