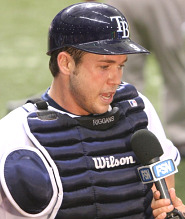 Just when you thought the Mets were “done” re-vamping the roster this offseason, they go out and add more lukewarm bodies to the cause.

We’ve already gone over the Jacobs signing. The 22-year-old Sandoval was a former JuCo standout and part-timer at Long Beach State who was plucked out of the Arizona Winter League; I’d guess he’ll be filler on one of the A-ball clubs. If his nickname were “Kung-Fu Panda” I might be more excited.

Riggans is at best a backup catcher in AAA, and I’m scratching my head at this signing, considering that the Mets are overloaded with backup AAA catchers. I guess they need extra squatters for spring training to catch the pitchers. MetsBlog posted a 104-game CHONE projection which makes little sense, either, considering that Riggans hasn’t played in more than 44 games at any level since 2006, and has appeared in more than 90 games in a season only once in his 9 years as a pro. He has always had the reputation as a standout defensive catcher, but injuries have nagged him throughout his career — and his arm has been through one Tommy John surgery thus far. What I love about him is his hard-nosed approach to the game, his tenacity, and his fiery personality. But even I, as a catcher who loves all catchers, has to wonder how far those attributes will take him. Personally, I’ll be rooting hard for him. However I’m confused about where he fits in — and wonder how he’ll get a fair shot — as long as Chris Coste, Henry Blanco, Omir Santos, and Josh Thole are around.

Finally, there is Takahashi. What are the chances that Jerry Manuel confuses Hisanori with Ken Takahashi? Perhaps Manuel will even mispronounce his last name as “Taka-HEE-shee”, like he did with Ken until late August.

There was a lot of buzz around Takahashi this winter, and I’m not sure why. He’s a soft-tossing lefty whose main out pitch is a screwball. For those unaware of how a screwball moves, it is basically a change-up that fades away from righthanded hitters. That said, Takahashi’s skill set doesn’t equate to a LOOGY role, so his best bet to make the team is as a fifth starter / long reliever. Hmm … sounds a lot like Ken Takahashi, doesn’t it?

Pretty cool, isn’t it? Not only are we all on the edge of our seats waiting for pitchers and catcher to report, but the Mets go the extra yard and over-deliver by releasing all this exciting news. I’m so jazzed I may order a season-ticket package!